A study on pattern of locoregional recurrence and its relation to the irradiated volume in patients with carcinoma breast receiving adjuvant radiotherapy
All submissions of the EM system will be redirected to Online Manuscript Submission System. Authors are requested to submit articles directly to Online Manuscript Submission System of respective journal.

Aims and objectives: Loco Regional Recurrences (LRR) can occur in up to 5%- 15% of patients with breast cancer despite appropriate treatment and this can potentially be a harbinger for subsequent systemic relapse. We analysed the incidence and patterns of LRR in breast cancer patients who received adjuvant radiotherapy from January 2015 to December 2018 at our centre.

Methodology: The planning CT scans and the imaging done at the time of recurrences were superimposed to find out if the recurrences are inside or outside the irradiated volume.

Conclusions: The rate of LRR among patients with breast cancer after adjuvant radiotherapy is low in our experience. 41.7% of all LRR involved IMN either in isolation or along with other sites. This highlights the importance of IMN as a site of LRR and hence the need to address the ipsilateral IMN in all patients receiving adjuvant radiotherapy for advanced breast cancer.

Breast cancer is the most common cancer in India with an incidence of 13.5% in the year 2020 [1]. Regional irradiation is an important strategy in the management of breast cancer as it reduces Loco Regional Recurrences (LRR) and thereby breast cancer related mortality. The inclusion of regional nodes in the irradiated volume improves the Disease Free Survival (DFS) when compared to whole breast irradiation or chest wall radiation alone. Post mastectomy irradiation in locally advanced breast cancer reduces LRR, overall recurrence and improve overall survival [2, 3]. The benefit of regional irradiation for patients with involved axillary nodes has been shown in metaanalysis to reduce LRR, overall recurrence and improve overall survival [4].

Despite treatment with adjuvant radiotherapy after mastectomy or Breast Conserving Surgery (BCS), LRR occur in approximately 5%-15% of patients [3,5-8]. The most common site of recurrence after adjuvant radiotherapy is the ipsilateral breast or the chest wall, comprising 60%-95% of all LRR [9,10]. Loco regional recurrences are predictor of an increased risk of concurrent or subsequent systemic relapse [11,12]. Early recurrences, especially within the first 2 years after primary treatment have a worse prognosis [13].

Mapping of patterns of LRR with respect to the presently accepted contouring consensus guidelines like European Society for Radiotherapy and Oncology (ESTRO) [14-15] and that of the Radiation Therapy Oncology Group (RTOG) [16] shows that these guidelines successfully encompass most areas of LRR. In the present study we analysed the incidence and pattern of LRR with respect to the irradiated volume in patients who received adjuvant radiotherapy for breast cancer at our centre.

All patients who were planned for adjuvant radiotherapy underwent a plain CT scan with a slice thickness of 5mm after immobilisation on a dedicated CT simulator (Optima GE). At our centre, conventional 2D planning technique is used to delineate the radiation field for post mastectomy radiotherapy. Chest wall and supraclavicular fossa are treated for patients with T3 or above and for node positive patients. Medial and lateral tangents are used for treating the chest wall and a matched anterior field is used for the ipsilateral supraclavicular fossa. Entire axilla is included in the treatment field when there was evidence of extra capsular extension in the nodes in postoperative specimens. Internal Mammary Nodes (IMN) is not routinely included in the treatment volume and is irradiated when there was clinical or radiological evidence of positive IMN prior to treatment. A radiation dose of 40Gy/15 daily fractions, 5 days a week is prescribed.

For adjuvant radiotherapy after BCS, Three Dimensional Conformal Radiotherapy (3DCRT) is used at our centre. Contouring guidelines recommended by Radiation Therapy Oncology Group (RTOG) are followed for delineating the clinical target volumes [16]. The target volume includes the entire breast to a dose of 40Gy/15fr followed by boost RT 10Gy/5fr to the tumour bed which includes post-operative cavity with 1.5 cm expansion, including the surgical clips and post-operative scar. Breast alone is treated for T2N0 disease. Supraclavicular fossa is included in the irradiation volume in patients with T3 and T4 disease, node positive disease and for patients after neoadjuvant chemotherapy. Axilla is treated if there was evidence of extra capsular extension.

The number (%) of patients with LRR among post mastectomy patients, patients after breast conservation surgery and both the groups combined were recorded. We also looked into whether any demographic or histopathological characteristics common among patients with LRR were present.

Most common site of LRR was Supra Clavicular Fossa (SCF) (n=7; 58%) followed by chest wall (n=5; 41.6%), and axilla (n=2; 16.6%). More than one site of LRR was noted for four (33.3%) patients. All of them had recurrences in SCF and IMN. Two patients had LRR in the chest wall in addition, and one patient had LRR in the axilla in addition to SCF and IMN. The incidence and pattern of LRR is given in Table 1.

Relationship of site of LRR and the irradiated volume

Out of the 12 patients with LRR, 11(91.6%) patients had inside field recurrence. Five patients recurred outside the radiation field. All out of field recurrences occurred in the Internal Mammary Node (IMN) (41.7%). There were no marginal recurrences.

The site of LRR in each patient and its relation to the irradiated volume are detailed in Table 2.

Tab. 2. Sites of loco regional recurrence in each patient and their relation to the irradiated volume

Planning CT scans were available for 7/12 patients. The CT scans taken after diagnosis of relapse were superimposed with CT scans taken during radiation planning for these patients. For the remaining 5 patients the sites of relapse were assessed clinically, radio logically and based on the records on the irradiated fields, the recurrence sites were categorised to be whether infield, out of field or marginal. Sample cases with infield recurrence are shown in Figure 1. The site of recurrence is contoured in red and superimposed onto the planning CT scan. The colour wash for 95% isodose is shown in blue colour. Sample case with infield recurrence and contralateral supraclavicular recurrence is shown in Figure 2. The same patient had out of field (Internal Mammary Node) recurrence.

Figure 1: Sample case with infield recurrence in the chest wall and axilla. The site of recurrence is contoured in red 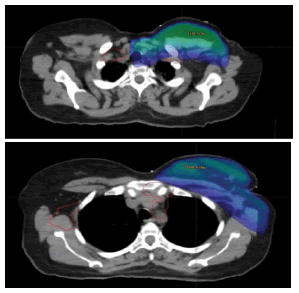 Figure 2: Axial image of Sample Case With Infield (scf) recurrence. The site of recurrence is shown in red. The patient has contralateral supraclavicular lymph node and out of field (Internal Mammary Node) recurrence in addition

Clinical and Histological characteristics of patients with loco regional recurrence

The median age for patients with loco regional relapse was 43.5y (range 33y-54y). All patients had locally advanced disease. All except one patient had node positive disease, majority (7/12) having nodal stage of N2 or above. All twelve patients received chemotherapy.

Tab. 3. Clinical and Histological characteristics of patients with LRR

The role of adjuvant radiotherapy in patients with carcinoma breast had been established in several large randomised trials and meta-analyses [4,10]. In breast cancer patients treated with mastectomy without PMRT, an overall LRR rate of 21.3% was demonstrated in the report from International Breast Cancer Study Group (IBCSG) after a median follow-up of 14.5 years [17]. Among these recurrences, the most common site of LRR was the chest wall (53%), followed by the supra/infraclavicular region (26%) and the axilla (13%). Tumour relapse at the internal mammary region was rarely reported (1%). Post mastectomy RT for patients with involved axillary nodes has been shown in meta-analysis to reduce LRR, overall recurrence and improve overall survival [4].

The EBCTCG analyses and the Danish Breast Cancer Studies have demonstrated that LRR occur in approximately 5%-15% of patients, despite treatment with adjuvant radiotherapy after mastectomy or Breast Conserving Surgery (BCS) [4-6,10]. The most common site of recurrence after adjuvant radiotherapy is the ipsilateral breast or the chest wall, comprising 60%-95% of all LRR [9, 10].

In our study, the LRR rate is 2.3% after a median follow up of 37.5 months (18-52 months). The lower rate of LRR noted may be due to the shorter follow up duration. The most common sites of recurrence were supraclavicular fossa (58%) and chest wall (41.6%) as demonstrated in other large trials.

The immunohistochemical measurements for the expression of Estrogen Receptors (ER) and Progesterone Receptors (PR), human epidermal growth factor receptor 2 (HER2 neu), and the Ki-67 antigen are used to classify breast cancers and correlate well with genetically different breast cancer subtypes [21, 22], which are predictive of the risk of recurrence and outcome in addition to classic prognostic factors [23,24]. The prognosis is better for Luminal A subtype and it worsens in the order of luminal B, Her2 type and triple negative breast cancer.

Loco regional recurrences are typically associated with an increased risk of concurrent or subsequent systemic relapse [11, 12]. In the EORTC 10801 and DBCG-82 TM analysis, out of the 1807 patients, 133 had local recurrence, the majority within 5 years after initial treatment [12]. An early LR is an indicator of a biologically aggressive tumour; early loco-regional relapse carries a poor prognosis and salvage treatment only cures a limited number of patients, whether treated by MRM or BCS originally. Early recurrences within the first 2 years after primary treatment seem to have a worse prognosis [25].

All out of field recurrences were in the internal mammary nodes. The routine use of prophylactic IMN irradiation is controversial. Based on recent meta-analysis some guidelines recommend IMN irradiation in node positive cases [33]. In our study, the rate of LRR among patients with breast cancer after adjuvant radiotherapy is low but, five out of twelve (41.7%) patients had failed in the IMN. This highlights the importance of IMN as a site of LRR and hence the need to address the ipsilateral IMN in all patients receiving adjuvant radiotherapy for advanced breast cancer.

The rate of loco regional recurrence among patients with breast cancer after adjuvant radiotherapy is low (12/517 patients, 2.3%) and is comparable to the available international data. Majority of the patients had infield recurrence, pointing to the biologically aggressive nature of the disease. All out of field recurrence occurred in internal mammary nodes highlighting the importance of inclusion of IMN in the irradiation volume.

We acknowledge the continuous support of Dr. Sameer EP in the compilation and finalisation of the manuscript. We thank Mrs Bindu Anil Kumar for the statistical support.