Neoplastic diseases are liable for 12% of deaths around the world. The researchers of several disciplines tried to observe the dynamics of tumour growth with the response to other cell population of the physical body. They need the used ever-new technique to regulate the tumour growth and its eradication from the physical body. Clinically, there are many treatment strategies like surgery, chemotherapy, radiotherapy, gene therapy, immunotherapy and combination of this etc. to beat the disease. During this paper, we analysed a model for the effect of radiogenic therapy within the treatment of cancer. Local stability analysis at various equilibrium points has discussed during this paper. For greater interest, we have shown that the tumour free equilibrium point is globally asymptotically stable. We even have done numerical verification of our mathematical result.

A multi-faceted disease, which involves heterogeneous interaction between abnormal cells and surrounding environment of it, called Cancer [1]. When the body is not capable to control the growth of abnormal cell and when the body cell lose their ability to die, occur cancer [2]. Surgery, chemotherapy, radiotherapy, hormone therapy, and immunotherapy, either in isolation or in the combination of two or more of these are prominently used in cancer treatment [3]. With the utilization of radioisotopes, radiation is highly effective to eradicate tumours [4]. Chemotherapy is the treatment in which mostly used chemically designed drugs. Today, the researchers heavily busy with immunotherapy because it contains lesser side effects than other treatments. Immunotherapy increasing the effectiveness of the immune system to counter cancer cells by emphasizing the body's own natural ability to battle cancer. It encompasses the use of cytokines with ACI, engineering genetic antibody called (mAbs), and IL-2 therapy to improve or restore immune system function. However, chemo-immunotherapy enriches tumour recession and antitumor immune response [1]. Speciously vaccines, monoclonal antibodies, lymphocytes and cytokines are the key tools for tumour immunology [5]. The harshness of disease, treatment procedure and asset of patients’ immune system are the key factors on which cancer treatment depends [6-9].

Gene therapy may use when no other therapies which are mentioned above treated well to the patient’s body. By introducing a well-designed gene into the cells of a patient gene therapy correct an inborn inaccuracy of metabolism, alter or repair an acquired genetic abnormality, and provide a new function to a cell [10]. Recently, the research has proven that with the lesser effect on normal tissues a combination of gene and radiotherapy called radiogenic therapy may perform well in cancer curability [4,11,12]. Also, it has clinically demonstrated that the use of radiogenic therapy has many potential reimbursements with different toxicity profiles of both two therapies [13]. Radiations counter abnormal cells and increase the proliferation rate of the body’s immune cells and greater the anti-tumour response [11]. At the same time, gene therapy also kills tumour cells by inserting toxin genes under the control of a tumour-specific promoter and blocks the mechanisms by which tumours evade immunological destruction [2].

Mathematical modelling is increasing rapidly to predict the effectiveness of specific treatment. Modelling of any biological phenomena links the experimental result to computational results [14,15]. Mathematical models played an active role in the research of disease dynamics and are becoming instrumental in planning treatment strategies and give deep insight into understanding complex biological processes [16]. Modelling of cancer is usually divided into two phases, the one is to deal with the concept of the system without treatment, and another one is treatments in the evocative form [1]. Treatments with new features are evolved in nowadays, and it becomes a broad research area for any kind of researchers. In this study, we have proposed a radiogenic therapy cancer model by modifying the Tsygvintsev et al. gene therapy model [12] and based on radiotherapy model [9] with some assumptions. Further, we have analysed the dynamics of the model using the basics of mathematics.

Definition: A Lyapunov function W(Y) is a function consisting of state variables which has a minimum at an equilibrium point and which has no local minima [17].

Lemma: Let Ω be a region of phase space containing the equilibrium point y*. Let W: Ω→R be a continuous and differentiable function. W is a positive definite function for the point y* if it satisfies the following two conditions.

Lemma: Let y* be an equilibrium point of the differential equation y=f(y) and let W be a positive definite function for this point. The equilibrium point is globally asymptotically stable i.e., the solutions tend to this point for initial conditions in the neighbourhood of y* if W (y) <0 for all y ∈ Ω -{y*} [17].

In this study, we formulate our model that primarily based on Tsygvintsev et al. [12] gene therapy model. The model deals with effector cell population E(t), tumour or cancerous cell population T(t), gene therapy u1 (one kind immunotherapy) and a single dose of radiotherapy γ.

The tumour cell: Tumour cells T(t) proliferate logistically which can be modelled by rT(1-bT), at any time t>0 with parameters and b assigning the cancer growth rate and cancer cell capacity respectively. The term

used for the high cancer clearance during gene therapy with the effector cells negative response. The single-dose radiation γ kills only the tumour direct contact with tumour site [9]. Keeping in these, the dynamics of tumour cells represented by following differential equation.

The overall model: With the above discussion, we may finalize our model, which is

1. The effector cells E(t) proliferate by itself with a decreasing function of Michaelis-Menten form

2. The effector cells E(t) arise with direct contact of tumour T(t) Both the two therapies can have the ability to clear the tumour at the same time at a different level

4. Radiation γ supply directly to the tumour site such that it kills tumour cells T(t) only

Therefore, we can drop these non-negative quantities, hence we get

From the second equation of system, it follows that

From the standard Kamke comparison theory [19], we get

Now, from the first equation of the system (3), it follows that

[By assumption and parameter values this is constant] 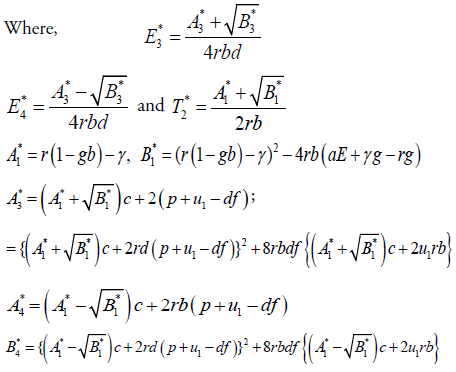 For stability analysis linearizing the system (3) to obtain Jacobian as follows:

Local stability at each equilibrium point is checked by using Lemma 2.1 and the parameter Table 1 and has the following results.

The coexistence of both effector and tumour cell: With using the value of the parameters from Table 1 and the radiation dose γ=0.1 the systems has two biologically feasible equilibrium points out of which

shows inward spiral behaviour with locally asymptotically stable nature. Hence, at this point, both effector and tumour compete with each other in presence of radiogenic therapy. That means both cells population goes to damped oscillation behaviour about zero instead of asymptotes to zero (Figure 1a). The radiogenic therapy may cut out: Employing the values presented in Table 1 as well as radiation dose γ=0.195 number of stationary points is only one

Table 1. The parameter value for the model

The radiogenic therapy succeeds: Through the values presented in Table 1 as well as the immuno-therapy dose u1 =53, cancer clearance term a=5 and the radiation dose γ=0.1, there exists only one equilibrium point

. That means, at this, the body may be in a healthy stage as because the system behaves asymptotically stable with nodal sink nature. The tumour cells asymptote to zero rather than oscillating about zero (Figure 1c) i.e., after a sufficient amount of time and a suitable amount of radiation and immuno-therapy dose the tumour cells are vanished by the use of treatment. This shows the combined effect of radiogenic therapy.

Linear stability analysis shows how a system behaves in a neighbourhood of an equilibrium point. It does not, however, describe anything about what happens further away from equilibrium. In this section, we will show the point

is globally stable by constructing a Lyapunov function, which described the total eradication of the tumour.

Define a Lyapunov functional of the model as

Differentiating on both sides with respect to time, we get 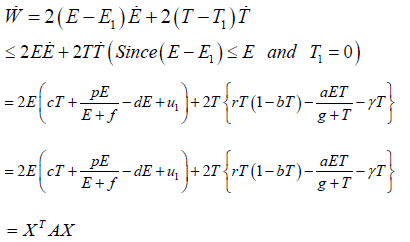 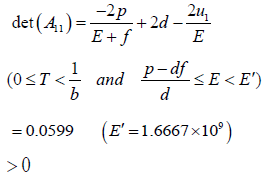 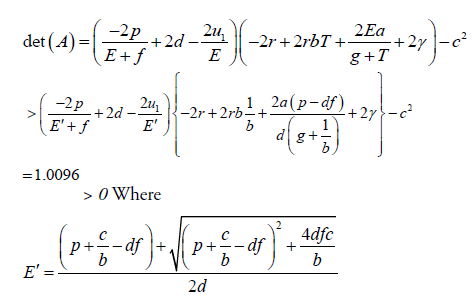 ∴W <0, because the matrix A is positive definite.

to be globally asymptotically stable [Lemma 2.3]. Hence, the equilibrium point

is globally asymptotically stable on the domain

is denote the nonnegative octant of R2) if the Lyapunov W<0 at this point (Figures 2 and 3). 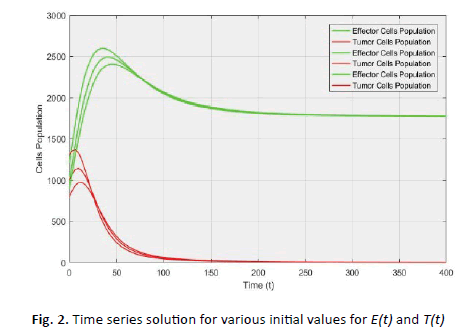 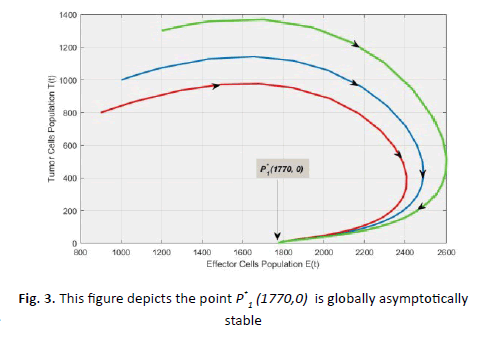 Cancer research has undergone radical changes in the last few decades. The main subject of this paper to investigate the effectiveness of radiogenic therapy. Here, we have observed that if we treat tumour site with sufficient amount of immunotherapy drugs and radiotherapy dose under some circumstances, cancer may be eradicated from the body. We further investigated for the total eradication of cancer by checking global stability at tumour free equilibrium. From our observation, the trajectory of the system goes towards the point

for various initial conditions (Figure 2) which described the global stability of the system (Figure 3). Hence, we may conclude that cancer may eradicate from the body with the use of radiogenic therapy by choosing a suitable amount of drug dose. This research gives small amounts of help to the oncologists in practice the cancer treatment. In future, we will analyse the model with pulsed radiation and optimal continuous radiation therapy using delay differential equation for a better realistic scenario.