Introduction: for early stage glottic cancer, different schedules had been applied. The use of hypofractionation seems to be attractive for shorter overall treatment time and decreased cost of treatment. The aim of our trial is to study the local control and survival rates of hypo fractionated radiotherapy schedule of 55Gy/20 fractions with 2.75Gy/fraction. Methods: T1-2 N0 glottic squamous cell carcinoma was treated at Clinical Oncology department, Tanta university hospital between February 2015 and January 2018. All patients were treated with a schedule of 55Gy/20 fractions/4 weeks. Patients for whom surgery was done whether cordotomy or stripping using laser have been removed. Local control, regional control, and overall survival probabilities were determined. Results: This phase II prospective study, forty-one early stage glottic cancer patients who had fulfilled inclusion criteria were identified. The median follow-up time was 30 (range 5 - 64) months. T1 and T2 disease were reported in Twenty (48.8%) and 21 (51.2%) patients Complete response was reported in (40/41) 97.5 % patients. Five-year actuarial local control rates were 75.1%, 80.8%, 75% and 71.6% in overall, T1 a, T1b and T2 respectively (p=0.977). After the initial full clinical response, a total of 8/40 (20 percent) patients experienced disease recurrence with a median recurrence period of 19 (range 4-59) months after the initial complete clinical response. The 5-year OS were 83.7%. A total of 6 (14.6%) deaths occurred during follow up. Univariate covariate analysis did not show any important association (all p>0.05) with local control. Only one significant covariate associated with overall survival was trans glottic extension in T2 disease (p<0.019). Grade 3 skin toxicity was reported in 4 (11%) patients. Enteral nutrition using nasogastric tube was reported in 7 (17%) patients with grade 3 mucositis. Conclusions: This study had shown that a regimen of 55Gy /20 fractions/4 weeks achieve reasonable late toxicity with good local control for early glottis cancer.

Squamous Cell Carcinoma (SCC) of the larynx is the most common type of head and neck cancer in males.it represents 4.5% of all head and neck malignancies [1]. Globally, the total 5-year overall incidence rates is 154,977 male cases and 22,445 female cases in 2018 [2].

Glottic cancer is diagnosed at an early stage (Tis-T1-T2), more frequently than other laryngeal sites, due to the early onset of clinical symptoms, such as speech hoarseness and dysphonia. Different conservative treatment modalities are effective in early glottis cancer as Radiotherapy (RT) [1], transoral laser surgery [3,4] or Partial Laryngectomy (PL) [5], especially if the anterior commissure is involved, with good and similar functional and oncological results among these treatment options.

Definitive radiation therapy is an established treatment modality for patients with early laryngeal carcinoma [6] aiming for cancer cure, vocal cord preservation with acceptable voice quality, and minimal morbidity and mortality. Definitive RT achieves most of these goals in patients with early glottic carcinoma, and salvage laryngectomy is preserved for relapsed cases with local control rate of 90%-100% for recurrent cases after initial radiation therapy [7-9].

Several dose-fractionation schedules for radiotherapy are used to treat early laryngeal carcinoma. [10,11]. The use of hypo fractionated RT regimens became more common since a randomized trial from Japan [12] demonstrated that better local control rates with such treatment modalities [13]. While noticing that short fractionation regimes remain the less common practice worldwide, hypo fractionated schedules were successful, with less strong evidence based than that for traditional fractionation [14].

The aim of hypo fractionation regimens is to minimize tumour repopulation during irradiation. In view of the small field sizes, which allow higher fractional doses without increased late morbidity; this is especially interesting for early glottis cancer [14]. The history of United Kingdom (UK) audits has shown that in cases of early glottic cancer the higher fraction dose e.g. 2.75 Gy in schedules of 55 Gy/20 fractions had been used, [16, 17].

Published data was limited for hypo fractionated schedule of glottis cancer. We will investigate the hypo fractionated radiotherapy regimen in dose of 55Gy/20 fractions/4 weeks in T1/2 glottic carcinoma in Egyptian population.

This is a prospective phase II research conducted at Tanta University Hospital between February 2015 and January 2018. Eligible patients are over 18 years old with histologically proved early glottic SCC, T1-2 N0 M0. All patients in the study preferred definitive radiation therapy after explanation of other treatment modalities and signed an informed consent. The protocol was approved by the ethical committee. Patients with recurrent early glottic carcinoma after laser surgery or cordotomy were excluded.

For all patients in the ENT Department, Tanta University, a comprehensive physical examination, including mirror examination and biopsy of all suspected biopsy with direct laryngoscopy with assessment of vocal cord mobility was performed.

High-resolution CT or MRI of the neck with contrast was done for all patients for detection of supra or infra-glottic or lymph node metastases. If LN metastases were suspected, PET CT scan and FNAC of suspicious cervical LNs were done and positive cases were excluded.

All patients were put in the supine position with extended neck and fixed by a thermoplastic mask. Virtual CT simulator was used for simulation with CT cuts ≤ 3 mm.

The Gross Target Volume (GTV) was contoured to encompass all suspicious lesions identified from data obtained from laryngoscopic and imaging studies.

The full larynx, including both anterior and posterior commissures and the arytenoids, was covered by the Clinical Target Volume (CTV). The Proposed Objective Volume (PTV) was a three-dimensional expansion of 0.5 cm-1 cm around the CTV. Near the carotid arteries, this margin can be reduced to as little as 0.3 cm. The same boundaries used in traditional radiotherapy are the upper and lower borders. For any patient, no elective neck irradiation was used.

Fifteen or 30° wedges have also been used to ensure a more homogeneous dose distribution. For unilateral lesions, the beam entering from the tumour side was more heavily weighted. The CT planning system used was (Eclipse treatment planning system v13.7).

Bolus was used according to the discretion of the clinician and was generally considered for disease in which the anterior third of the vocal cord or the anterior commissure is compromised, if any part of the PTV in this area is receiving an inadequate dose.

The energy used for treatment was 6 MV photons using CLINAC Linear accelerator, with multileaf collimators (UNIQUE) to a total dose of 55 Gy per fraction of 20 fractions, 2.75 Gy per fraction, given 5 days/week for 4 weeks.

During follow up, patients were followed once a week, and then monthly for the first two years afterward, the follow up increased thereafter. The toxicity was graded according to Radiation Therapy Oncology Group (RTOG) toxicity criteria [18].

This prospective phase 2 study included Forty- one patients with early squamous cell carcinoma glottic cancer. Patient, tumour and management characteristics are summarized in Table 1. Twenty (48.8%) patients had T1 and 21 (51.2%) patients had T2 disease. Thirty-five (85.4%) patients underwent a contrastenhanced staging CT of larynx and the remaining patients (14.6 %) underwent an MRI larynx. Hypofractionated radiotherapy in dose of 55 Gy/20 fractions in 2.75 Gy/fraction. The tumour biological effective dose estimated for the schedule is 67Gy [14]. The median follow-up time was 30 (5-64) months.

Median duration of radiotherapy was 26 (range 24 to 32) days. In three patients, the length of treatment was greater than 28 days (32, 33 and 34 days). The reason for delay was treatment toxicity.

After the original full therapeutic response, A total of 8/41 patients (19.5%) patients experienced disease recurrence. The median time to recurrence was 19 (range 4-59) months. The recurrence trends are summarized in Table 2.

Tab. 2. Pattern of recurrence and treatment

After median 18 month follow up period after radiotherapy, local recurrence occurred in five patients only. Three patients developed regional neck recurrence, one of which was in combination with recurrence at the primary subsite.

The 5-year OS were 83.7%. During follow up, six patients (14.6 %) died. The causes of deaths were: recurrent larynx cancer, second cancers and death from other reasons. Figure 1-3 illustrates 5-year local control, and overall survival outcomes. Univariate analysis of covariates did not show any significant correlated with local control (all p>0.05). Only one covariate was significantly correlated with overall survival: Trans glottic extension in T2 disease (p<0.019) (Table 3). 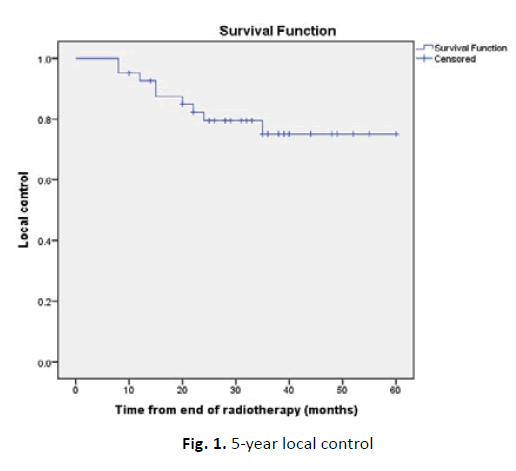 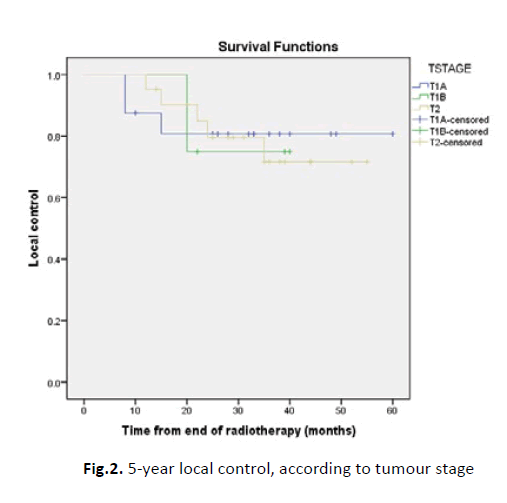 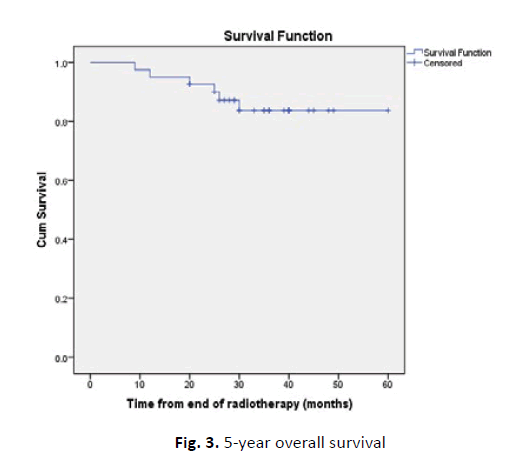 Reported RTOG grade 3 skin toxicity occurred in 4 (11%) patients. Enteral nutrition through nasogastric tube reported in 7 (17%) patients with grade 3 mucositis. In the first three months post radiotherapy, no death was reported Postcircoid stenosis was reported in only one patient managed with repeated dilatation. Three years after radiotherapy, one patient reported stridor for which tracheostomy was done. Long-term enteral feeding was not necessary in any patients. Enteral feeding was not necessary in any patients for long duration. One patient (2.5%) developed second malignancy (soft tissue sarcoma) infield in left neck, 5 years post-radiotherapy (Table 4).

Accelerated repopulation has a dismal impact on the radical radiotherapy treatment for early glottic cancer. To reduce the repopulation, shortened overall treatment time had been proposed in the form of hypofractionation

Biological effective dose of three for a schedule of 55Gy/20 fractions is 105.4 Gy for late reacting tissues in contrast to 116.6Gy for standard fractionation schedule of schedule of 70Gy i/35 fractions. It implies a possible therapeutic benefit for hypofractionation. Hypofractionation is an appealing technique with a limited target volume and thus a small mucosal volume for early glottal cancers.

The effects of using a hypofractionated schedule of 55 Gy in 20 fractions, 2,75 Gy per fraction with high local control rates and acceptable treatment related toxicity. recorded in our single institution research.

Five-year local control rates from many research were compared [14, 19-23] utilizing hypofractionated radiotherapy protocols for T1-2 N0 SCC of the glottis. Schedule heterogeneity led to difficult comparison due to difference in tumor stage T1N0 disease versus T2N0 disease or T1-2N0 and variable outcome measures.

Laskar et al. [21] single institution using multiple fractionation schedules for T1 glottic cancer reported acceptable local control among them the fractionation schedule of 50-55Gy/15-16 fractions. Short et al. [26] T1/2 glottic carcinoma comparing 60-66Gy/30-33 fractions against 52.5-55Gy/20 fractions/4 weeks showed that The 5-year locoregional control was 75% versus 95% for T1 disease in favor of second schedule. In cases of T2 stage glottic cancer no difference in local control rate. Using 2.25 Gy/fraction had shown modest regimen as hypofractionated schedule. Yamazaki et al. T1 glottic cancer in 180 patients randomized to receive standard fractionation 60- 66Gy /30-33 fractions (2Gy/fraction) or hypofractionation in dose of 62.25-63Gy/25-28 fractions (2.25Gy/ fraction). With 77% versus 92% five-year local control, respectively. So increase the dose per fraction improved the local control rate [12]. T1/2 glottic cancer 585 patients treated of whom 61% of patients received ≥2.25Gy/fraction. Overall local control rates compared favourably with other studies with 5 year local control rates was 94%, 93%, 80% and 70% in T1a, T1b, T2a and T2b, respectively [27]. Treatment gaps more than forty-one day resulted in inferior disease outcome. Le et al multiple fraction sizes results were examined. Among which fraction size of 2.25 Gy was associated with good local control for T2 tumours [28]. Regardless the total and overall treatment time , the fraction size increase appeared to increase the local control with acceptable toxicity in early glottic cancer. [20-29]. There are several limitations to our study. As with other studies, with long term follow up, it is difficult to define whether the recurrence is new disease or local failure. But in our studies, we classified the cases as recurrence Comparison with other studies is difficult due to different TNM classification versions used [23]. Carotid sparing using Intensity Modulated Radiotherapy (IMRT) techniques is of importance [30-31]; the late cerebrovascular events could not be accurately recorded with traditional radiotherapy in our research.

In synopsis, Optimal fractions and early-glottic cancer treatment time must be established. This study showed the strong local control with an appropriate late toxicity for early glottic cancer in 55Gy/20 fractions/4 weeks.