The techniques of CT scanning in evaluation of diffuse lung disease

Diffuse (Interstitial) lung diseases are a diverse group of pathologies that involve the lung parenchyma and may end with respiratory failure. High resolution computed tomography has made significant progress in describing the pattern and extent of the illness. The study goal was to compare between the techniques of computed tomography used for chest imaging. A descriptive hospital-based study carried on in Baghdad medical city and Mosul General Hospital. A total number of 52 patients with suspected DILD (20 males and 32 females), their age was ranged from (5 to 88 years). The data have been collected from October 2019 to May 2020. The most used technique for diagnosing patients with suspicion of a lung disease is the HRCT technique, which has a percentage 36 (69.23%) while the spiral CT has a percentage 16 (30.77%), as a result the HRCT have twice accuracy than spiral tomography technique. The commonest pattern of diffuse lung disease is high attenuation, as it reached a percentage of 42.55%. It was discovered 13 times by HRCT and 7 times by spiral CT. Consolidation was the commonest pattern in the high attenuation pattern (21.27%). Nodular pattern accounts for 31.91% of diffuse lung disease. The most common nodular lesion is sarcoidosis (14.89%). Because to low sensitivity, specificity, and diagnostic accuracy of X-ray, HRCT scan is recommended, particularly for symptomatic patients with normal or ambiguous chest X-rays. HRCT is presently regarded as the best imaging method for diffuse lung diseases.

Diffuse Interstitial Lung Diseases (DILDs) include a large group of illnesses that affect the lung parenchyma. They are classified to (a) DILDs with known etiology, (b) idiopathic (with unknown etiology) interstitial pneumonias, (c) granulomatous DILDs, and (d) a group of DILDs that involve lymphangio-leiomyomatosis and Langerhans cell histiocytosis [1, 2]. This category of disorders has a high morbidity and fatality rate. Therefore, a multidisciplinary approach involving clinical, pathological, and radiological coherence is essential to obtain an correct early diagnosis, plan appropriate treatments, monitor disease course and treatment response [3]. Radiological investigations are crucial in the diagnosis and management of DILD [4]. CXRs have a desirable profile in terms of low radiation dosage, low cost, ease of use, and availability, but they have limited resolution of low-contrast structures and are relatively nonspecific [5, 6]. The standard single-section helical CT scanner provides a more accurate evaluation of the lung parenchyma than CXR [7]. High Resolution Computed Tomography (HRCT) of the chest has become the gold standard technique in the evaluation of patients with DILD over the past two decades [8]. HRCT is also useful in follow-up patients with diagnosed DILDs [9].

A total number of 52 patients with suspected DILD (20 males and 32 females), their age was ranged from (5 to 88 years). The data have been collected from October 2019 to May 2020. Types of devices that we used were computed tomography (Toshiba 128 detector and Philips 128 detector). All patients were examined with standard X-ray for the chest followed by CT technique using 128 detectors (Toshiba, Philips) in Baghdad medical city and Mosul General Hospital in Iraq.

It is described as thin-section CT scans (1 mm to 2 mm slice thickness) combined with high-spatial resolution algorithm. There are two type of HRCT:

Conventional HRCT: Noncontiguous axial thin-section of about 1 mm thickness of the lungs are obtained and reconstructed using a high spatial resolution algorithm without using intravascular contrast to display minute features of the lung parenchyma.

➣ Patient position, usually supine or prone for the detection of suspected DILD

➣ Full inspiration is usually required; however expiratory HRCT scans may be required in patients suffering from obstructive lung diseases.

Generally, window levels ranging from 600 to 700 HU and window widths ranging from 1000 to 1500 HU are appropriate for displaying ‘‘lung windows”.

Tab. 1. Distribution of patients according to ages 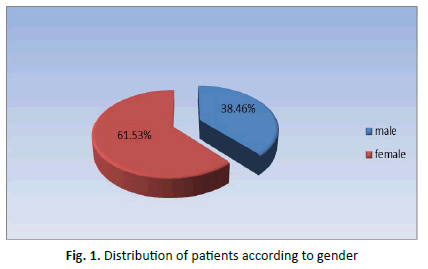 Figure 1: Distribution of patients according to gender

Tab. 2. Results of CXR and CT finding for 52 patients

Tab. 3. The patients according to CXR and CT finding

Tab. 4. The performance of chest CT for DLDs with CXR results

That is why we can conclude through our study that it is sensitivity of CT with CXR results as a reference 90.38% and this is consistent with studies that say that CT is the highest sensitivity.

The most used technique for diagnosing patients with suspicion of a lung disease is the HRCT technique, which has a percentage 36 (69.23%), while the spiral CT has a percentage 16 (30.77%), this mean HRCT nearly twice the spiral tomography technique (Table 4). This is corresponding to most previous studies that say it is the best and most used technology in evaluation of diffuse lung disease [9].

HRCT is divided into Conventional HRCT (noncontiguous) and VHRCT (contiguous) Techniques. Note in our study that the first one was used only for two pediatric patients (5.56%) of the total patients examined with HRCT. This can be attributed to children's radiological exposure. In children, there is increased concern about the radiation hazards, and since the radiation dosage in the noncontiguous slices conventional HRCT scan is significantly lower than that from a multislice helical CT scan, the conventional HRCT is usually preferred in surveying suspected or established diffuse pulmonary interstitial disease as well as the in assessment of small airways and peripheral airspaces in children [5]. The second technique was used in all the remaining patients 34 (94.44%) for whom an HRCT examination is required. The spiral (contiguous) CT technique is more commonly used with dye 11(68.75%) specially in a high attenuation pattern of lung disease 5(45.45%) in order to exclude it as tumor lumps as well as identify malignant and benign tumors in the lung if present (Table 5) (Figure 2). 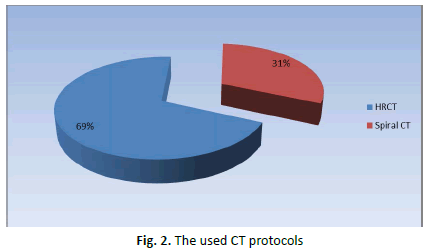 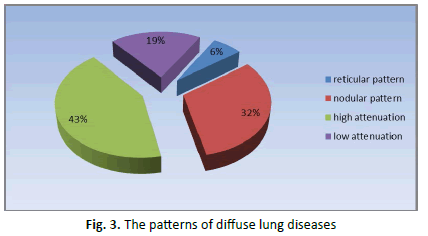 The chest X-ray remains the first diagnostic method for detecting diffuse infiltrative lung disease. However, because to its limited sensitivity, specificity, as well as diagnostic accuracy, HRCT scan is recommended, particularly for symptomatic patients with nonspecific or clear chest X-rays. HRCT is currently regarded as the optimum imaging method for diffuse interstitial lung diseases, and it serves an important investigative role. HRCT is capable of defining lung architecture at the secondary lobular level as well as defining a variety of pathologies in patients having diffuse lung diseases. HRCT have a significant role in the evaluation of diffuse lung diseases and is indicated in patients when the combination of the clinical and the radiographic findings is not allowing a confident diagnosis.

The authors declare no conflict of interest.

The study was conducted following the protocol of the Ethical Committee and written informed consent was obtained from all the participants.

All the authors participate in the design, collection and analysis of the data of the research.