Neurotransmitters are endogenous chemical compounds that have the ability for neurotransmission and play a major role in shaping everyday life and functions. Cytotoxic drugs are a type of cancer and other diseases like rheumatoid arthritis, SLE, and different autoimmune syndromes treatment that utilize one or more chemotherapeutic agents as part of a regimen. The study aims are to calculate levels of neurotransmitters in patients receiving cytotoxic drugs and determined the effect of these agents on NTs concentration before and after. A prospective comparison study carried out before and after receives cytotoxic treatment for a period of three months from June 2020 to September 2020. Assessments of the studied samples will be conducted as a baseline before and after receiving drugs. A total of 50 participants were involved in the study. The blood samples were collected about 5 ml and diluted in the concentrated washing solution. The neurotransmitters evaluated are Adrenaline, Acetylcholine, Dopamine, Histamine, Glutamate, GABA, Serotonin, and Somatostatin. The mean age of the sample of the study was 49.28 ± 12.44. Patients with comorbidity conditions were 60%. The mean acetylcholine concentration pre and post receiving cytotoxic drugs was relatively not altering. Cytotoxic agents affected the mean epinephrine concentration, which was directly dropping to half. There was a decline of concentration of somatostatin post treatment compared with pre (from 33.83 ± 9.78 ng/L to 8.4 ± 2.66 ng/L), with a significant association (t-test=2.3, p=0.028). The mean concentration of dopamine pre was relatively unchanged from post-treatment. There was no differences association between pre and post mean level of histamine in this study. In this study, we found a high level of glutamine in the pre-phase (2025.4 ± 753.7 μmol/L), but it converted to normal level post treatment, with statistically significant differences (t-test=9.051, p<0.000). GABA concentration, the pre was above the normal range (1.31 ± 0.18 mumol/l), while the post was within normal, this dropping curve was statistically significant differences (t-test=9.442, p<0.000). There was a slight decrease in serotonin level among pre to post (from 366.6 ± 237.72 ng/mL to 298.77 ± 231.8 ng/mL), but these changes not significant. In conclusion, the NTs concentration may be altered by the administration of cytotoxic drugs in chronic diseases in a different pattern either decrease or return to normal.

Neurotransmitters are endogenous chemical compounds that have the ability for neurotransmission by carrying messages among neurons via influence on the postsynaptic membranes, changing the structures of the synapse, and communicate by sending reverse-direction messages that affect the release or reuptake of transmitters [1]. It transmits signals across a chemical synapse, such as a neuromuscular junction, from one neuron to another neuron, muscle cell, or gland cell, and is released from synaptic vesicles in synapses into the synaptic cleft, where they are received by receptors. Many neurotransmitters are synthesized from simple and plentiful precursors such as amino acids, which are readily available from the diet. Neurotransmitters play a major role in shaping everyday life and functions [1].

Cytotoxic drugs are a type of cancer and other diseases like rheumatoid arthritis, SLE, and different autoimmune syndromes treatment that utilize one or more chemotherapeutic agents as part of a regimen [2]. The traditional chemotherapeutic agents are almost always cytotoxic, are interfering with cell division (mitosis), besides that the chemotherapy destroys cells whether cancerous or healthy, which may then lead to cell death [2]. Chemotherapy side effects are traced to destroy normal cells that divide rapidly and thus include cells in the bone marrow, digestive tract, and hair follicles [2,3].

There are several modalities in the administration of chemotherapeutic drugs [2,4-7], including: Induction, combined, consolidation, intensification, combination, neoadjuvant, adjuvant and salvage or palliative chemotherapy.

In this research, we try to compare NTs concentrations at pre and post-treatment with cytotoxic drugs using different morbid and chronic diseases like CNS tumours, RA, SLE, and others.

A prospective comparison study carried out before and after receives cytotoxic treatment for a period of three months from June 2020 to September 2020. Assessments of the studied samples will be conducted as a baseline before and after receiving drugs. A total of 50 participants were involved in the study, who accepted patient inform consent.

➢ Patients before undergo the first cycle of cytotoxic.

➢ Those who have to agree to involvement in the study.

➢ Those refused study entrance from the beginning.

➢ Those whom referral from another centre.

The blood samples were collected about 5 ml put in a refrigerator at 4°C. Taken test when it balances to room temperature and diluted the concentrated washing solution with double distilled water (1:25). Each neurotransmitter kit has its directions and steps of preparation procedure as mention in the special leaflets. 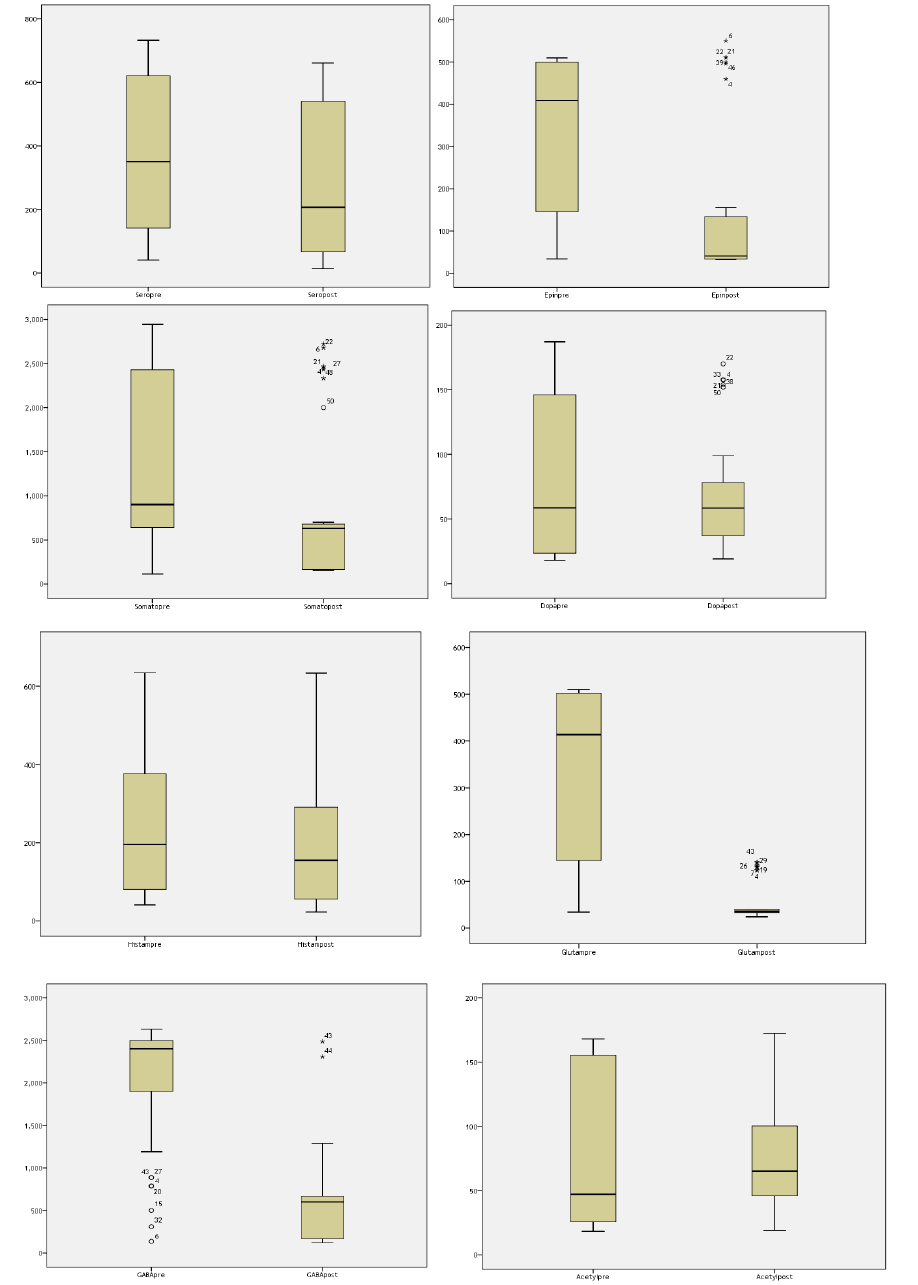 Figure 1: Box plot of neurotransmitters concentration before and after cytotoxic

We used mean and SD to represent the data while describing variables presented using their frequencies and parentage. One way paired T-test for variables was used. SPSS version 24 was used for data entry and analysis. P-value was considered significant if <0.05.

The majority of patients suffered from RA 40%. The most regimens of drugs used were RCHOP (cyclophosphamide and rituximab) in 76% of patients (Table 1).

Nausea and vomiting are common side effects of chemotherapy and molecular-targeted therapy. With the advent of newer agents used to treat Chemotherapy-Induced Nausea and Vomiting (CINV), the incidence has greatly decreased; however, this continues to be a significant cause of concern to patients. The incidence of acute CINV (within 24 hours of drug administration) is estimated to be 37% to 59% and delayed CINV (>24 hours after administration) occurs in 47% to 75% of patients treated with chemotherapy [8,9]. Although emesis appears to be better controlled with the newer antiemetic agents, nausea is still a problem and can adversely affect the patient’s quality of life [9-11]. CINV can cause a decrease in quality of life [10], disruption in treatment schedules, decrease in compliance, medical complications such as dehydration, poor nutrition, electrolyte imbalance, frequently resulting in hospitalization, and elevation in the costs of health care and loss of workdays [12].

There has been a lot of work done in the past couple of decades toward elucidating the pathophysiology of CINV, which is complex and involves several pathways. The concept of a single “vomiting centre” in the brain proposed by Wang and Morison in 1950 is now replaced by a complex set of neurons called the “central pattern generator,” believed to coordinate the series of events that lead to emesis, as proposed by Koga and Fukuga in 1992 [6].

It is now believed that the principal actors are the neurotransmitter receptors for serotonin 5-hydroxy tryptamine 3 (5HT3), dopamine, substance P, and cholecystokinin, which are located in the entero-chromaffin cells in the small intestinal epithelium and are the terminal ends of vagal afferents. Antineoplastic agents stimulate these vagal afferents either by direct toxicity or by breaking of the mucosal barrier and causing the release of neurotransmitters from the entero-chromaffin cells, which then bind to the receptors; the stimulus is carried to the dorsal brain stem (NTS and area postrema) and activates the central pattern generator [13].

Area postrema contains the chemotherapy trigger zone and may have different mechanisms of activation, which are incompletely understood. The amygdala is another less-understood area of the brain that is associated with CINV. 5HT receptors are found in all three key areas: the vagal afferent chain, NTS, and area postrema. 5HT3 is the most important of all of the receptors in mediating CINV. It is has been shown that the abdominal vagal afferents are the principal mediators of CINV with 5HT3 agonists [14]. Although dopamine, 5HT3, and substance P (a neurokinin) all exert pro-emetic effects, endocannabinoids have antagonistic action [14, 15].

The different functions of acetylcholine, glutamate, GABA, glycine, dopamine, norepinephrine, and serotonin play important and different roles in body physiology. Glutamate is the excitatory neurotransmitter used in the brain and acts as the primary mediator of nervous system plasticity by modifying synapses, which researchers suspect are the memory-storage elements of the brain. Whereas, Gamma-Aminobutyric Acid (GABA) and glycine, serve as the main inhibitory neurotransmitters [16, 17].

Epinephrine is a monoamine that is synthesized in the central nervous system, and when the release of norepinephrine in the brain exert effects on a variety of processes, involving stress, sleep, attention, focus, and inflammation. In addition, play important roles in modulating the responses of the autonomic nervous system [20].

Glutamate is including in many neurodegenerative published studies. Glutamate has been excitotoxicity undoubtedly which plays a role in the pathogenesis of Alzheimer's disease and Parkinson's syndrome, and it accelerates the progression of these diseases [23]. Gamma-Aminobutyric Acid (GABA) is a targeted factor in the treatment of anxiety disorder, insomnia, epilepsy [21].

Dopamine plays an essential role in many physiological processes, also it has a role in the pathology of psychiatric and neurodegenerative diseases. Disturbances in the neurotransmission of dopamine are implicated in schizophrenia, psychosis, depression, and attention deficit hyperactivity disorder. There is a degeneration of dopaminergic neurons in the substantia nigra pars compacta is involved in the pathogenesis of these diseases [24].

Serotonin control several neuropsychiatric processes have been implicated in the pathogenesis of depression, when patients exposure to endogenous depression, they have low plasma levels of tryptophan, which is a precursor of serotonin [19]. Norepinephrine is involved in the pathogenesis of neuropsychiatric disorders such as anxiety disorders, mood disorders, attention-deficit hyperactivity disorder, Alzheimer’s disease, and posttraumatic stress disorder [25].

Most of NTs dropping level occurs after receiving cytotoxic drugs, but this stay within the normal range of concentration in the body.

The authors declare that there is no conflict of interest.