Study of a five years survival rate of cancer in Sudanese

Background: The statistics nowadays are an important aspect of the fighting of the world against cancer. Unfortunately, there is no enough statistical information's about cancer incidence, epidemiology, or survival rates in Sudan, there are only a few knowledge's from the published studies. Material and Methods: This retrospective study has been performed to estimate the overall 5-year cancer survival rate in Sudan was calculated and the factors that could influence the rate were described. The study was based on data from the Radiation and Isotope Centre (RICK) of 160 adult patients with different types of cancer. The patients have been followed up to 2013 with their treatment and death records. Results: The study showed that the total 5-year survival rate in Sudan was 33.75%, with many factors affecting this rate, including patient sex. Conclusion: Increasing knowledge of the disease improves the detection, diagnosis, and treatment of patients, and improves survival. If any carcinogenic patient is diagnosed with cancer, treatment should be determined and administered as soon as possible.

For decades, cancer has focused on scientific research. Increased understanding of the disease will improve the detection, diagnosis, and treatment and enhance patient survival from death [1]. Most cancer therapy advances are the result of wellorganized, retrospective clinical trials (i.e., verified information from previously treated and analysed patients). Current and potential trials (e.g., patient selection, and controlled randomized trials) [2]. The outcome of any clinical trial has to be defined at the clinical stage otherwise; the trial may proceed indefinitely without statistical tests [3]. The five-year survival rate is the kind of survivor rate that is usually calculated by a point of diagnosis to estimate the prognostic of a particular condition. Lead-time variation from earlier diagnosis may affect the 5-year survival rate interpretation. Absolute 5-year survival rates define the percentage of patients having been treated after 5 years of illness. Within five years of diagnosis, the proportion of patients living with illness decides the overall survival rate divided by the percentage of the general population living within five years of age and a similar gender [4,5]. The relative survival rates for five years are well below 100%, as compared to the general population, highlighting over mortality among cancer patients. Contrary to the absolute five-year survival rate, if cancer patients have the same or even higher survival rate than the general public, then the relative five-year survival rate can be equal to and even larger than 100 percent. This can occur if cancer patients can usually be cured or if cancer patients are more privileged than the general population (e.g. socio-economic considerations or access to healthcare) [6-8]. Symptoms and potential causes include lumps, haemorrhages, excessive coughing, unexplained weight loss, and bowel changes. Diseases can occur from cell proliferation or migration to other body parts [9,10]. Benign tumours do not have such contractions. Roughly 10% of these are responsible for cigarettes, and 22% for deaths from cancer [11], obesity, inadequate diet, physical absence, or excessive alcohol intake [12,13]. When we don't smoke, keep our weight own, consume too few alcohols, consume too many vegetables and whole grains, vaccinate under certain conditions of illness, take too few processed meat and avoid excessive exposure to sunlight many cancers can be avoided [14]. Some 8.8 million deaths occurred last year or 15%, and 7% [15]. Men's most common cancers are colon, prostate, colorectal, and stomach cancer and breast, colorectal, and lung cancer in women (Figures 1-3) [16]. 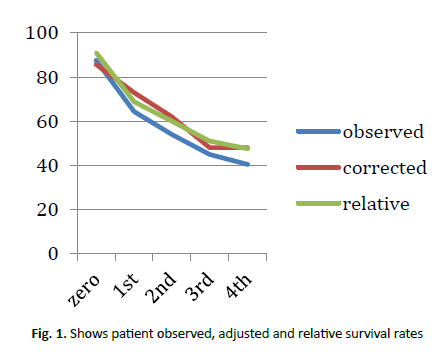 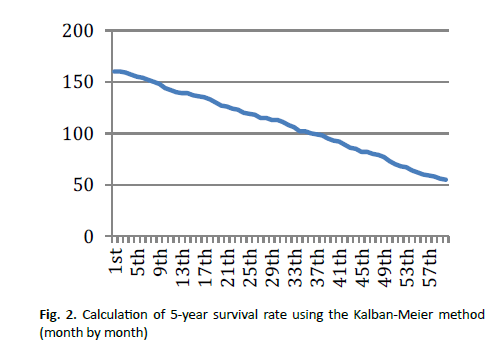 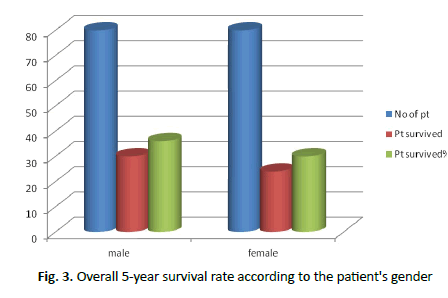 Figure 3. Overall 5-year survival rate according to the patient's gender

This study is a Sudanese adult cancer cohort retrospective study. The sample included 160 people aged between 20 years-90 years. The data has been collected from the Khartoum Radiation and Isotope Centre (RICK) patient file system, which includes patient age, jobs, symptoms, and interval of illness, location and magnitude of tumours, years after diagnosis, number of patients deaths year after disease diagnosis, and the last number of patients seen live during treatment. The five-year survival rate, direct method, acting method, and Kalban-Meier method calculations used in this study [17-20]. 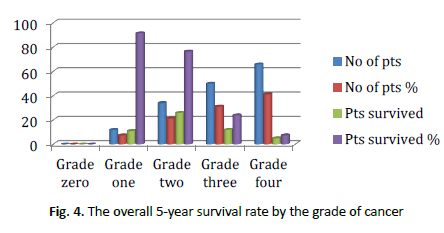 Figure 4. The overall 5-year survival rate by the grade of cancer 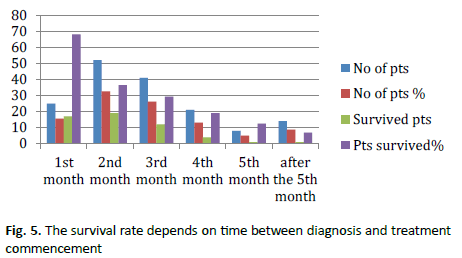 Figure 5. The survival rate depends on time between diagnosis and treatment commencement

Calculation of the 5-years survival by the direct method 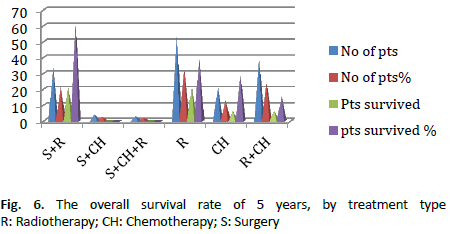 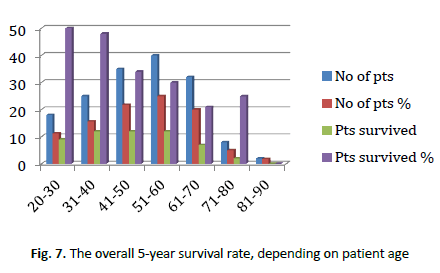 Figure 7. The overall 5-year survival rate, depending on patient age

Figure 8. The survival rate of 5 years by cancer site

In Table 1, the actuarial (observed) 5-years survival rate is 0.405 or 40.5%. Filtration of other deaths instead of diseases (cancer) calculates the corrected 5-year survival rate at 48 percent [27]. The expected probabilities could be obtained by multiplying the annual probabilities of survival in the overall population life-tables. The correct chance depends on the sex and age of the patient and is taken from the annual registration table. The supposed expected 5-years survival rate for this study is 85%.

In Sudan, the overall 5-year cancer survival rate is 33.7 percent, which is determined by various universal organizations, the top limit of 5-year average cancer survival in developing countries.The average survival rate is also highest for African countries. Women's survival rate is 6% lower than men's. This may require research to determine whether the incidence of cancer in women and men is higher or another factor. The study shows that the shorter time from cancer diagnosis to treatment, the higher the five-year survival rate, the better cancer. The study found that, with the grade, the survival rate decreased gradually. The study showed nobody in grade 0 (in situ tumour) was diagnosed. Unfortunately, some cancer patients are diagnosed in some way, and if they have found opportunities to start treatment, the disease has spread and increased to reduce their chances of survival. The study showed a better and progressive 5-year survival rate for younger patients aged 70-70. The five-year survival rate is above 60-70 in the 71-80-year age group, which may be based on the common behaviour of Sudan's elders, rather than going to the doctor, who prefer to stay home with illness. No survival rates were recorded in the 81-90-year-old group, but this may not mean an increased likelihood of other suspected deaths for all cancer killed at that age. Although many factors depend on the doctor-determined cancer treatment protocol (e.g. grade, location, patient status, etc) a very low survival rate may be required from a different perspective after multi-protocol treatment [28].

Increasing knowledge of the disease improves the detection, diagnosis, and treatment of patients, and improves survival. If any carcinogenic patient is diagnosed with cancer, treatment should be determined and administered as soon as possible. Much can be done in nearly all patients with cancer, which can significantly affect their quality of life (e.g. good physics, good care, and good care). Regular research is very important to determine the likelihood of cancer in hospitals and patients with high-quality cancer and low susceptibility to survival, rather than waiting. Lung cancer is a fatal cancer in Sudan, and it is true in many countries. Prostate cancer is a more common cancer in Sudan, which in many countries is at the end of the fatal cancer list.

The authors declare that there is no conflict of interest with regard to this study.