Introduction: Radiotherapy is the main line of treatment of head and neck cancer including hypopharyngeal cancer either adjuvant/neoadjuvant radiotherapy or neoadjuvant/adjuvant concurrent chemoradiotherapy. The aim of radiotherapy is to provide maximum safe dose to organ at risk (healthy normal tissues). Studies had shown that the need to increase dose to the tumour was associated with great hazard to healthy normal tissues with induction of acute and late toxicity. The acute toxicity will result in treatment breaks and decreased local control due to repopulation of the tumour cells especially in head and neck cancer. Aim of the study: It was to reduce the radiation dose received by critical normal organs to allowed tolerance. Materials and methods: Twenty-two hypopharyngeal cancer patients either receiving radiotherapy as definitive therapy with concurrent cisplatin in dose of 40 mgm/m2 (group A) or adjuvant radiotherapy concurrent with same dose of cisplatin (group B). The closest critical organs of interest were the eye lens, parotid gland, submandibular salivary gland, oral mucosa, and thyroid gland. The patients were treated with Simultaneous Integrated Boost (SIB) (2 Gy to 2.21 Gy) Intensity Modulated Radiation Therapy (IMRT) with total dose of 66 -70 Gy, 5 fractions per week. Results: Response after definitive treatment with concurrent simultaneous boost were 5 out of elven cases 45.5% achieved pathological complete response. Median overall survival is 33 months with range from 14 month-36 month for the whole group, with 2-year overall survival 63.3% and 81.8% in definitive and adjuvant group respectively which was statistically insignificant (p=0.457). Two-year local control 90.9% versus 63.6% in adjuvant versus definitive treatment which was statistical significance (p=0.034). Two-year larynx preservation survival was 63.3%. As regard the homogeneity index and confirmatory index, they were per guidelines to decrease the dose to organ at risk. No more than grade 2 xerostomia was reported in both treatment arms. Conclusion: these results showed high local control with simultaneous integrated boost IMRT with reduced dose to organ at risk and it was complementary to other studies regarding the new era of modern radiation therapy techniques.

When human cells are subjected to ionizing radiation, it leads to deleterious effects on DNA. Among DNA damage, double strand DNA breaks are the most deleterious event for the side effects of radiotherapy [1-2].

Escalation of radiation dose had been used to improve the treatment outcome [10,11]. One the dose escalation technique is simultaneous integrated boost, which associated with increased local treatment control due to reduced repopulation [12-14].

So, the aim of our study was to evaluate simultaneous integrated boost IMRT/with without chemotherapy in locally advanced hypopharyngeal cancer as regard locoregional control, dosimetric study and toxicity in our institution.

This study was carried out at the oncology department; Tanta University in the period from January 2017 to December 2020, following written consent was taken from twenty-two locally advanced hypo pharyngeal cancer stage III and stage IVA patients according to TNM 8th edition [15-17]. The protocol was approved by the ethical committee.

For postoperative radiotherapy: Primary tumour and macroscopic suspicious lymph nodes diagnosed clinically and by imaging studies are delineated as the Gross Target Volume (GTV). High risk CTV1 was defined as tumour bed +0.5-1 cm and extracapsular nodal extension +0.5-1 cm, CTV2 was produced by GTV primary and nodal. Elective CTV3 is produced by elective nodal and adjacent tumour bed [18, 19]. To account for patient and treatment setup errors margin of 5 mm was added to each CTV to obtain planned target volume.

Patients are classified into two groups:

In both groups, patients received cisplatin in dose of 40 mgm/m2 weekly during radiotherapy with proper hydration. The energy used for treatment was 6MV photons using LINAC Linear accelerator, with multileaf collimators (UNIQUE) with dynamic multileaf collimator.

If patients lost weight more than 15%, nasogastric tube or per cutaneous gastrectomy were done.

Treatment follow up was done weekly during radiotherapy and month after end of treatment. In the first 2 years was done every month and every 6 months thereafter. Radiation therapy oncology group/European organization for treatment cancers defined acute toxicity as toxicity that occurred during radiotherapy or within 90 days after [20]. Demographic data of 22 patients with locally advanced hypopharyngeal carcinoma stage III and IV A and divided in two groups: group A formed of elven cases received definitive concurrent chemo radiotherapy IMRT with simultaneous integrated boost while group B consisted of elven cases which received adjuvant chemo radiotherapy IMRT with SIB , and were summarized in table 1. No statistical difference as regard sex performance status, site either pyriform or postcorcoid squamous cell carcinoma in both treatment groups. But nine (81.8%) cases in definitive group (group A) were stage IVA while ten (90.9%) cases in adjuvant group (group B) were stage III which was statistically significant (0.01). 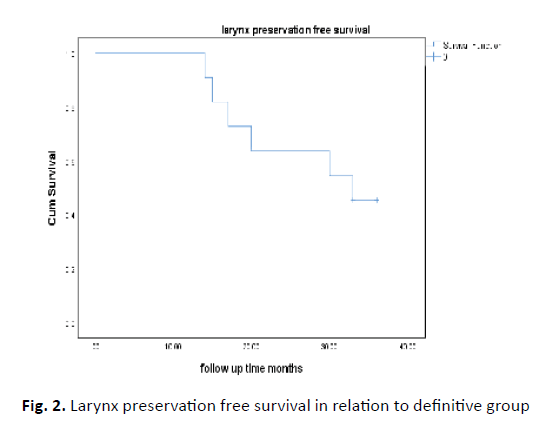 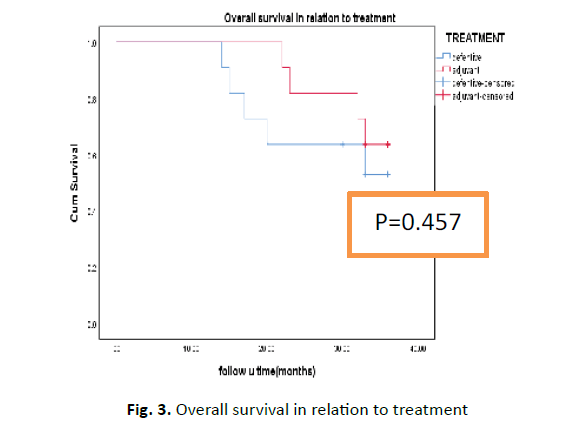 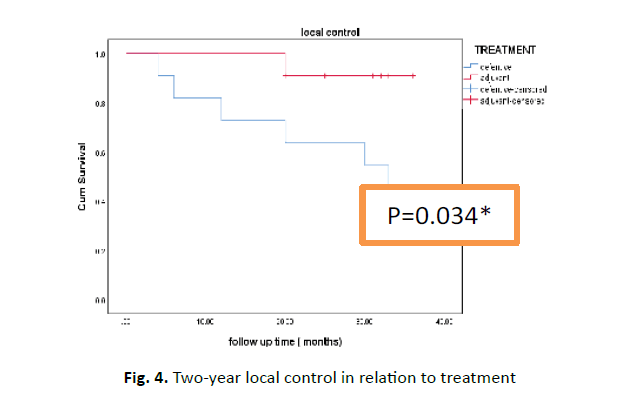 We aimed at coverage of the planned target volume and simultaneous integrated boost with 95% of prescribed dose in both treatment arms. Table 4 showed the homogeneity index for PTV and SIB, it showed no statistical difference. It is defined (D1%-D99%) /D50%was calculated for SIB and PTV minus SIB. Confirmatory index was calculated by V95% 2/(treatment volume â?? planned integrated volume) and it was not statistically significant difference as regard both treatment groups. As regard organ at risk no statistically significant difference as regard mean dose to parotid D60% to oral cavity, spinal cord d 1c and brain stem D1cm as shown in Table 4.

Tab. 5. Toxicity of both treatment groups

The standard therapy for locally advanced head and neck cancer particularly hypopharynx is standard fractionation radiotherapy concurrent with cisplatin chemotherapy either single agent or combined with 5 fluorouracil or taxene chemotherapy [23-25]. This was associated with increased toxicity.

The introduction of new modalities of treatment such as IMRT and arc therapy lessen the toxicity associated with concurrent chemoradiotherapy especially salivary gland affection had to been introduced [3, 26-29].

No statistical difference in patient demographic data between two groups of treatment like other [30-31]. Complete response in our series in patients received definitive IMRT-SIB with cisplatin was 45.5% and this was in accordance with huang et al. who reported complete response rate of 48% in which patients with locally advanced hypopharyngeal cancer received concurrent IMRT-SIB with cisplatin [30].

This in contrast to that reported in the study done by Franchin et al. in which patients with laryngeal cancer T3N0-1 or hypopharynx T2-4 N2-3 stage received induction chemotherapy followed by concurrent IMRT-SIB with cisplatin-5 fluorouracil, the complete response was 88.3% higher than reported by us due to addition of cancer larynx, induction chemotherapy and different concurrent chemoradiotherapy in that study [31]. Our complete response was also different from that reported by Liu et al being higher than that reported by us 82.5% because in that study patient with locally advanced hypopharyngeal cancer received IMRT-SIB concomitant with cisplatin and 5 fluorouracil [32].

In our study, two-year larynx preservation survival was 63.3% coincident with other authors [31-32], different from Huang et al., who reported that two laryngeal preservation rates of 50% that is lower than that reported by us and this may be due to 6% of cases in that trial was posterior hypopharyngeal wall but no cases in our trial [30].

In our study, two-year local control 90.9% versus 63.6% in adjuvant versus definitive treatment which was statistical significance figure (p=0.034), and this was different from that reported by Huang et al higher 2-year locoregional group in the definitive group and statistically insignificant and may be due to only 50% of cases of adjuvant group received concomitant chemoradiotherapy [30].

Multivariate analysis of locoregional control in our study showed no statistically significant of age, sex, cigarette smokers, performance status, site of tumor, stage and treatment lines similar to other authors [30-33].

Our study showed that SIB-IMRT had produced accepted treatment plan for both lines of treatment either adjuvant or definitive line of treatment with acceptable dose to organ at risk as mentioned in results and this in line with that reported by many authors [10-14].

Conventional 3D conformal radiotherapy is associated with increased xerostomia; several studies had showed that IMRT has been used to reduce the dose to the salivary glands and resultant xerostomia [25, 33-34].

As our study compromised hypopharyngeal carcinoma, it was associated higher incidence of xerostomia due irradiation of submandibular lymph nodes with subsequent submandibular and minor salivary glands beside parotid glands. Grade 2 mucositis in the definitive group was higher than adjuvant group which was statistically significant (0.01) and no late grade 3 xerostomia was reported, only grade 1 xerostomia was reported in 4 cases (18.2%) and grade 3 was reported in 2 cases (9.1%). similar to that reported by other authors [35-36].

So, our study revealed that IMRT-SIB was associated improved 2 year overall survival, loco regional control which was higher in adjuvant group and improved larynx preservation free survival in the definitive group with reduced incidence of early late toxicity.

The limitation of our study is the small sample size; more cases are needed to document the results and longer duration of follow up.