Orbit is an unseal site part for metastasis, especially for nasopharyngeal carcinoma. A 47-years-old man presented a right exophthalmia two years after treatment for locally advanced Nasopharyngeal Carcinoma. He was diagnosed with orbital metastasis of NPC. Loco regional assessment in the CT and MRI showed voluminous tissue process, in the right superior-external palpebral border, well limited, intensely and heterogeneously enhanced tissue hyper signal, measuring approximately (60 × 64 × 56) mm. After refusing radiotherapy, treatment was based on palliative chemotherapy with a good response initially and then a pejorative evolution of the disease. Orbital metastases of NPC are rare; considering the radio-sensitivity of the NPC, more conformal EBRT (VMAT) or Particle therapy (Protons, Carbon-ion) is required

Nasopharyngeal Carcinoma (NPC) has an unusual variable incidence across the world (generally <1/100000), but common in South East Asia, Southern China and North Africa (ranges from 20-30/100000) [1]. Despite the emergence of more advanced treatments such as Intensity-Modulated Radiotherapy (IMRT), tumour recurrence is still encountered.

In general, the orbit is an unusual site for metastatic cancer. Metastasis to the orbit has ranged from 1% to 13% among the reported series of all orbital tumours [2]. Although NPC involves the orbits through direct extension to the orbital apex, metastasis of NPC to the orbit has rarely been reported [3]. We report a case of intra-orbital, extra-bulbar metastases of NPC.

Our patient is a 47-year-old man, a chronic smoker. He was diagnosed in 2017 with a locally advanced undifferentiated carcinoma of the nasopharynx. The tumour included the entire nasopharynx, but more pronounced on the right, extending into the oropharynx and supraglottic level, measuring approximately 58 mm in height, associated with bilateral subAngulo-mandibular lymph nodes of 5 cm diameter: cT4N3M0 (AJCC TNM 8th edition). He received 3 cycles of induction chemotherapy (Cisplatin and Doxorubicin) followed by concomitant radio-chemotherapy with cisplatin (6 courses in total).

Radiotherapy was delivered using IMRT with 3 levels of dose using the integrated boost technique: PTV 70Gy (high) daily fraction of 2Gy, PTV 63Gy (intermediate) daily fraction of 1.8 Gy and PTV 56 Gy (low) daily fraction of 1.6 GY for a total of 35 fractions, over 7 weeks. We were able to keep the tolerance doses of organs at risk within normal limits and at the same time deliver the intended dose of radiation to the PTVs (Figure 1). The patient received treatment according to plan and the tolerance was good. He was reviewed weekly during the treatment. There were no significant side effects observed except grade 1 radiodermatitis and grade 1 radio-mucositis.

Two years after the end of the radiotherapy, the patient was still alive in good loco-regional and distant control until January 2020, when he consulted in our department for progressively worsening, non-painful, non-axial right exophthalmia (Figure 2).

A CT scan was performed and showed a subcutaneous lesion, adjacent to the glabella, hypodense, well limited, heterogeneously enhanced after contrast, measuring (60 × 55 × 50) mm, with right pre-septal endo-orbital extension, invasion of the superior rectus muscle, and associated with bone lysis of the anterior wall of the right frontal sinus which is invaded, it remains distant from the optic nerve. We note a complete response in the nasopharynx and cervical nodes.

The MRI showed a voluminous tissue process, in the right superior-external palpebral border, well-bounded, intensely and heterogeneously enhanced tissue hypersignal, measuring approximately (60 × 64 × 56) mm. The process is expansive, invading the frontal bone, frontal sinus and an anterior ethmoidal cell with fluid retention within them. It also has an endo-orbital extension (Figure 3). Figure 3: Orbital MRI section of our case showing the right orbital metastasis A): axial B): coronal

A CT scan of the chest and abdomen and a bone scan showed no abnormalities. The PET CT was not available.

After the 3 cycles of TPF, an orbital CT scan was performed showed regression of the right palpebral subcutaneous lesion measuring (52 × 50 × 48)mm vs (58 × 58 × 52)mm (estimated at 35%), still presenting the same proportions and extensions, i.e. a right endo-orbital extension with a displacement of the right supraorbital muscle, associated with bone lysis of the anterior wall of the right frontal sinus which is invaded.

Knowing that at that time the patient refused radiotherapy; and in an attempt of eye sparing, and considering the response to chemotherapy, it was decided to add 3 cycles of TPF.

After he completed the additional 3 cycles of TPF the patient had an unfavourable response with an increase in bulk size. The control orbital CT scan showed a progression in size of the right orbital mass with (85 × 60 × 65)mm (Figure 4 and Figure 5). 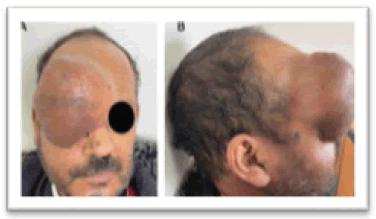 Figure 5: Orbital injected CT of our case after chemotherapy A): axial; B): coronal; C): sagittal section

In view of the negative outcome, the patient was offered palliative radiotherapy with a dose of 30 Gy in 10 fractions of 3Gy/fraction (Figure 6). The patient had accepted the RT treatment but eventually refused it before the start. He was then referred for palliative chemotherapy. Figure 6: Disposition of multiple 3DRT beams and dosimetry images in the 3 planes showing the 95% isodose conforming to PTV (in blue)

According to the literature the main primary tumours with orbital metastases are breast with 48%-53% of cases, then lung, and prostate [4]. But the frequency at each of the sites can differ depending on the demographics and country of origin of the study [5].

A retrospective review of medical records at a tertiary centre in southern China of 46 patients with cancer metastatic to the orbits by Yan et al. showed that the most common primary cancer that metastasizes to the orbit is nasopharyngeal carcinoma (30.34%) [6].

Excellent loco-regional control rates have been consistently achieved in the treatment of NPC using IMRT in the primary setting and the possible explanation of the recurrence suggested by the literature is that tumour cells of subclinical lesions in lowdose radiotherapy areas receive mostly sublethal damage and survive, then continue to split and lead to tumour recurrence; another explanation is that patients susceptible to NPC are prone to recurrence, but the normal structure of the areas adjacent to the nasopharynx have been destroyed by high-intensity rays during the first treatment, with the local blood supply reduced and unfavourable for tumour growth, so the tumour relocates and occurs far away from the nasopharynx [7].

Consequently, most recurrences are the result of radiation resistance. In addition, these radiation-resistant tumours are surrounded by critical Organs at Risk (OAR) that have already received a radiation dose close to tolerance [8].

For the management of NPC orbital metastasis, radiotherapy is the mainstay treatment, due to its sensitivity, but chemotherapy is also used in certain patients [3]. Knowing that one of the main objectives of this treatment is to improve patient’s quality of life and preserve the functional prognosis.

For the orbital metastasis in general, prognosis is poor and depends on the primary cancer, the overall mean survival time after orbital diagnosis is 15 months [3].

Orbital metastases of NPC are rare, but what can be retained from our case is that it is necessary to start the radiotherapy as early as possible considering the radiosensitivity of the NPC, especially with more conformal EBRT like VMAT or Particle therapy (Protons, Carbon-ion) given the risk of tumour progression under chemotherapy like in our case.