Background: Multiple Primary Malignant Tumors (MPMTs) are defined two or more histologically distinct malignancies in one individual, the occurrence of MPMTs are a rare clinical entity. The association between solid malignancies with a haematological neoplasm is even rare.

Case Presentation: We present a case of a 32 years old Indonesian male who was known case of Multiple Myeloma and on regular chemotherapy medication (vincristine, doxorubicin, and dexamethasone) since 2018, was admitted with a lump in his back with size 6x10cm since 6 months before admission, initially it was a small size but it’s getting bigger slowly. The patient did not complain about pain or numbness in his back. From the imaging studies, MSCT we found soft tissue mass originates from the left spinal rectus as high as the left thoracal 7 to the left 12 thoracal, the mass infiltrates the left pleura and subcutaneous fat with no visible destruction of ribs and impression of malignancy. When we did the core biopsy, we found proliferated tissue consisting of development mass or tumour cells with oval cells and from immature fatty cells (lipoblast) with the conclusion is liposarcoma and differential diagnosed round cell rhabdomyosarcoma. We managed the patient with chemotherapy treatment because the mass was unrespectable and the patient itself did not want to undergo surgery. We give the ifosfamide, mesna and etoposide regimen for the soft tissue sarcoma. After 3 cycles, evaluated imaging MSCT have done and the lump disappeared, there was no visible left thoracal region soft tissue mass, intrapulmonary metastases was not seen, there was no visible destruction of the ribs or thoracal vertebrae.

Conclusion: the case described represents a rare clinical condition called multiple primary malignant tumours, through the metachronous occurrence of multiple myeloma and soft tissue sarcoma. The lack of studies on this metachronous association, as well as the few reported cases in the literature, inhibits a greater clarification of the involved pathogenesis. However, soft tissue sarcoma was disappearing when we did chemotherapy treatment, further observation from the patients was necessary.

Soft Tissue Sarcoma (STS) has many histological subtypes; liposarcoma is one of the most common forms of STS. Its genesis in the differentiation of the primitive mesenchymal cells. While Multiple Myeloma (MM) is a haematology malignancy characterized by clonal plasma cell proliferative disorder that causes evidence of end-organ damage (myeloma defining events).

There were only a few studies explained about Multiple Primary Malignant Tumors (MPMTs), until now, there was no guideline to face the abnormalities of these problems. The pathophysiology was complex and the etiology was unclear. There was only a few case report that described these abnormalities, all of the cases reported MPMTs usually described the association of two solid malignancy or two haematology neoplasm, only a few studies reported the association between a solid malignancy with haematology malignancy (figure 1). 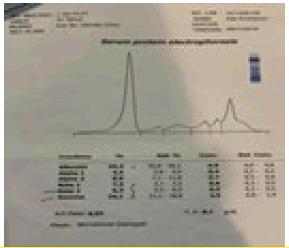 Figure 1: The Serum Protein Electrophoresis in the patient before treatment of multiple myeloma

A 32 years old Indonesian male who was diagnosed with Multiple Myeloma before from bone marrow aspirate that showed 22% plasma cells (figure 2), a monoclonal peak in the gamma globulion region (áµ? 24.1%) from the serum protein electrophoresis (figure 1), and multiple osteolytic lesion from the head imaging, and osteolytic digestion of the right and left clavicle from the chest imaging was undergone regular chemotherapy medication (vincristine, doxorubicin, and dexamethasone add on zoledronic acid) since October 2018. The patient was admitted to the haematology oncology polyclinic in July 2020 with a complaint about a lump in his back with size 6 cm × 10 cm since 6 months before admission, initially, it was a small size but it’s getting bigger slowly. The patient did not complain about pain or numbness in his back. From the MSCT imaging, we found soft tissue mass originates from the left spinal rectus as high as the left thoracal 7 to the left 12 thoracal, the mass infiltrates the left pleura and subcutaneous fat with no visible destruction of ribs and impression of malignancy (figure 3). When we did a core biopsy, we found proliferated tissue consisting of development mass or tumour cells with oval cells and from immature fatty cells (lipoblast) with the conclusion is liposarcoma and differential diagnosed round cell rhabdomyosarcoma (figure 4). Unfortunately, the immunohistochemical study of the material cannot be performed in our centre. Figure 2: The result of bone marrow aspiration in the patient before treatment of multiple myeloma Figure 3: The result of CT Scan Thorax with contrast in the patient (it shows mass in left thoracal 7 to the left 12 thoracal) before chemotherapy treatment Figure 4: The preparation of biopsy and the result of Histopathology with 10x and 40x enlargment (shows lipoblast)

We have already suggested patient do medical surgery or tumour resection but the patient refused and asked for other medical intervention. So, under oncological evaluation, he was simultaneously subjected to three cycles of chemotherapy with ifosfamide 4000 mg, mesna 1000 mg, and etoposide 100 mg. We give 3 cycles every 21 days, then we evaluate the chemotherapy medication that we give to the patient, we found that the lump disappeared, from the evaluated MSCT Imaging show that there was no visible left thoracal region soft tissue mass, no intrapulmonary metastases, no visible destruction of the ribs or thoracal vertebra with a complete response as a conclusion (figure 5). 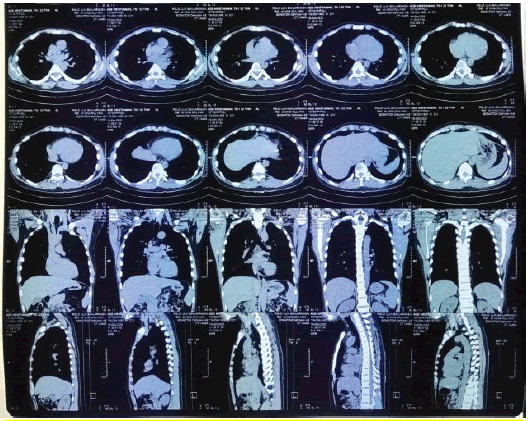 We also evaluate the multiple myeloma in this patient from bone marrow aspiration that showed normal, plasma cells 3%, polyclonal peak in the gamma globulin region (áµ? 15.6%), no laboratory abnormalities were found (figure 6). Figure 6: The result of Bone Marrow aspiration (shows that plasma cell only 3%) and serum electrophoresis protein after treatment

Multiple Primary Malignant Tumors (MPMTs) is a rare clinical condition, according to the literature data, its incidence is 2%-17%[1-4]. It is known that the metachronous occurrence is rare, and even less usual if the association of solid tumours with hematologic malignancy [5]. We described a patient case with metachronous multiple myeloma and soft tissue sarcoma, one year after the multiple myeloma condition was treated with chemotherapy, the patient had a mass in the back. Initially, we think it’s an extramedullary plasmacytoma, but from the histopathology, we found proliferation tissue contained mass or tumour cells that grew with round cell origin from immature lipid cells (lipoblast) unfortunately the immunohistochemistry examination cannot be done. The literature reports less than half a dozen cases of multiple myeloma and solid tumours [6- 8]. However, no conclusion has been reached regarding the pathogenesis of these metachronous cases of multiple myeloma and soft tissue sarcoma.

Soft tissue sarcoma collectively accounts for approximately 1% of all adult malignancies. Liposarcoma is one of the most common subtypes of STS [9]. The contrast CT scan and/or abdomen and pelvis MRI are the instruments that aid in the diagnosis and staging of the disease. We described the CT examination raised the diagnosis possibility, confirmed by the result of histopathology from the core biopsy and fine-needle aspiration biopsy.

The primary treatment for most patients with Soft Tissue Sarcoma (STS) is surgical resection with appropriately negative margins. Radiotherapy (RT) and/or chemotherapy (in the case of chemosensitive histologist) are often used prior to surgery in many centers to downstage large high-grade tumors to enable effective surgical resection. Chemotherapy in the setting of STS could be performed preoperative therapy or postoperative therapy [10-12]. Based on the study from Glimelius et al, state that some tumor types with limited sensitivity to chemotherapy, have anti-tumor effects that are well documented in randomized trials [13]. STS belong to the group of tumors with limited sensitivity but the effects are not well documented.

Multiple myeloma associated with soft tissue sarcoma can be due to the underlying state of immunosuppression or primary disease therapy. The post-secondary solid tumour after the myeloma diagnosis is breast cancer, colorectal cancer, melanoma, genitourinary cancer, prostate cancer and in a lower frequency, pulmonary neoplasm and sarcoma. It is known that patients with myeloma that have secondary neoplasm have a worse prognosis [14]. The pathogenesis is not understood, but we suggest that the immunodeficiency state due to multiple myeloma can play a key role in the metachronous soft tissue sarcoma emergence. However, the number of cases in the literature is very low.

Our report may be a contribution to new knowledge in the field of oncology. The lack of existing case reports and the absence of standard guidelines in our case may be contributed to the management of multiple primary malignancies with a form of haematological malignancy and solid tumours. The deficiency in our centre is not being able to conduct immunosuppressive examinations and molecular profiles related to soft tissue sarcoma. Our finding required a report of other cases or case series and further research related to multiple primary malignant tumours, especially in the form of haematological malignancy and solid tumours.

Ethical approval and consent to participant

Written informed consent was obtained from the patient for publication of this case report and any accompanying images. A copy of the written consent is available for review by the Editorin-Chief of this journal.

The authors have no competing interest to declare

There is no funding for this case report