The cancer cases in India are increasing every year and it is the second most common cause of death in India. Lung, colon, prostate, and breast cancer account for more than half of the cancer deaths [1]. Although there are many therapeutic strategies, including chemotherapy, to treat cancer, high systemic toxicity, and drug resistance limit the successful outcomes in most cases. Accordingly, several new strategies are being developed to control and treat cancer [2]. The use of herbs as medicine is deeply rooted in human history and folklore and virtually in all human cultures. Plants have a long history of use in the treatment of cancer [3]. Plant-derived products are excellent sources for the discovery and development of new cancer chemotherapies. Natural products have been rediscovered as important tools for drug development despite in combinatorial chemistry [4].

Bacopa monnieri (L.) Wettst belonging to Scrophulariaceae family is a herbaceous plant traditionally commonly called as brahmi is used from time immemorial in Ayurvedic and folklore medicines. The various ethno medicinal uses mentioned are procognitive, antioxidant, anti-inflammatory, neuroprotective, and anticonvulsant activity [5]. In addition to these properties B. monnieri is a potential source of anticancer lead molecules, the anticancer activity of ethanolic fraction is already reported by Md. Nasar Mallick et al. [6]. In our study we are evaluating the anticancer property of B. monnieri hexane fraction against MCF-7 breast cancer cell line.

The B. monnieri samples were collected from local area of Thalassery, Kerala, India. The extracts of B. monnieri was prepared using solvent extraction method and different fractions (hexane, chloroform and methanol) of whole plant extracts were prepared. The 5 mg powdered B. monnieri was mixed with 100 ml Hexane, chloroform or methanol and kept in magnetic stirrer overnight. The supernatant was taken and filtered using filter paper. At first the parent extracts of hexane, chloroform and methanol were used to screen for antitumor activity. Those extracts having bioactivity is subjected to sub-fractionation using solvents with adjacent polarity. Fifty ml hexane preparation was mixed with 50 ml of chloroform and kept of the magnetic stirrer and upper phase was taken and filtered using filter paper. All the extracts were passed through 0.22 µ membrane filter before using for in vitro activity on MCF-7cell lines. Similarly, DMSO control was also prepared and used in MCF-7 cell line. The 3-(4,5-dimethylthiazol-2-yl)-2,5-diphenyl tetrazolium bromide assay and trypan blue assay of all the extracts and of all fractions was carried out on MCF-7 cell line.

The cells culture was trypsinated, and the cell count was adjusted to 1.0 × 105 cells/100 µL in RPMI-1640 containing 10% FCS. To each well of the 96-well microtiter plate, (approximately 100 µL media contain 10,000 cells) was added and kept it in the CO2 incubator overnight for adhering of cells on plate. Next day, the media was replaced with fresh complete media (100 µL). The drug (100 µL) was added in triplicate well (for one concentration). Then, serial dilution of the drug was done; again 100 µL of complete media was added to get the total volume of 200 µL (100 µL+100 µL). After completing the treatment, the 96-well microtiter plate was kept in a CO2 incubator. After 24 h study, 20 µL of MTT was added and left for 4 h in a CO2 incubator and after that the media was discarded from the wells carefully. Lysis buffer was added for dissolving the formazan crystals formed after addition of MTT, and left for 30 min in the CO2 incubator. Readings were taken at 570 nm at 24 h and 48 h. Percentage cytotoxicity of these extracts was calculated by using the formula: ([C-S]/C) × 100. Where, C is the absorbance of the control and S is the absorbance of the sample. Trypan blue cell viability assay was performed by automated cell counter Invitrogen Countess II FL instrument by Thermo Fisher Scientific, USA.

The LC/MS/MS analysis was performed using Thermo Q Exactive MS coupled with UHPLC system. The plant extracts were passed through 0.22 µ membrane filter before LC/MS/MS analysis. 0.1% formic acid was set as solvent A and 0.1% formic acid in acetonitrile was used as solvent B. The mobile phase was run in gradient mode with 5% of solvent B, at 8 minutes it raised to 40%, at 12 minutes to 70%, 100% at 15 minutes and maintained at 100% till 18 minutes. At 21 minutes the gradient was brought to 55%, at 25 reached 5% and maintained at 5% till 30th minute. The MS was calibrated in both positive and negative modes prior to the sample run based on vendor’s protocol. The run was made at positive ion mode with resolution set at 35000, AGC target at 3e6 and scan range of 80 m/z to 1200 m/z. The data acquisition and LC/MS/MS run was controlled by Thermo Xcalibur 4.1. Raw files were analysed using Thermo Mz vault and data normalization and downstream analysis was done using XCMS online platform [7]. The molecules were identified from the refined unique features by manual search with m/z values having three decimal point similarities in the METLIN database [8-10]. 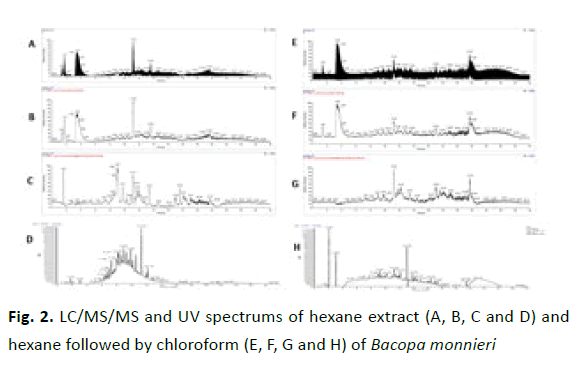 Figure 2: LC/MS/MS and UV spectrums of hexane extract (A, B, C and D) and hexane followed by chloroform (E, F, G and H) of Bacopa monnieri

The chromatograms of chloroform and methanol fractions of B. monnieri are different from that of hexane fraction. They are very different from each other also, showing the efficacy of the extraction procedure to separate different composition of molecules from B. monnieri whole plant. Since the bioactive property is not present in the chloroform or methanol fraction much detailed analysis were not conducted on these fractions (Figure 3). 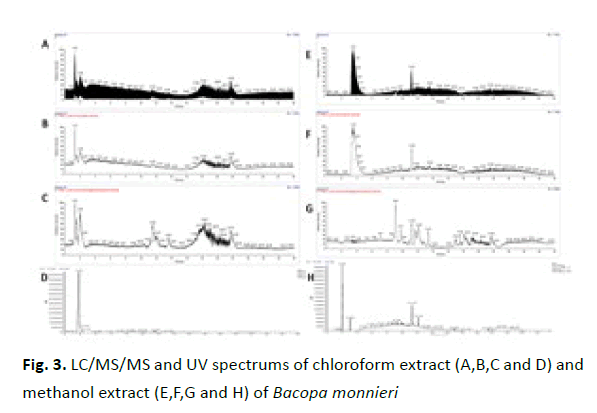 Figure 3: LC/MS/MS and UV spectrums of chloroform extract (A,B,C and D) and methanol extract (E,F,G and H) of Bacopa monnieri

The raw data files of B. monnieri hexane fraction run and chloroform daughter fraction run were subjected to comparative pair wise analysis in XCMS online platform. A total of 23809 features were identified altogether from both the samples. The results were shown as supplementary file 1. Out of this, 4406 features were found to be present only in the parent B. monnieri hexane fraction. The remaining 19403 features were present in both the hexane parent fraction and chloroform daughter fraction. In the analysis we get only very less features unique to daughter chloroform fraction and is absent to the parent hexane fraction, which indicate the stability of the identified features. The identified features were mapped into METLIN database using m/z values with three decimal points and zero δ ppm value. Those molecules identified from METLIN database consisted of the following molecules listed in Table 1. The table also shows the name chemical formula and structure retrieved from METLIN database.

Tab. 1. The list of representative identified compounds unique to the bioactive hexane fraction of Bacopa monnieri

This study identified cytotoxic activity in the hexane fraction of B. monnieri, whose active molecule is insoluble in the chloroform extraction. The activity of this fraction may be due to the molecules bacoposide X and Merbarone. Through this study we were able to create a natural product extraction process, having cytotoxic effect on breast cancer cell line MCF7. This fraction or these molecules can be used for future studies for creating novel chemotherapeutic options for breast cancer patients.

Deepak Roshan VG and Sheethel KP acknowledge the funding support from KSCSTE, YIPB program. All the authors acknowledge the Director, Malabar Cancer Centre for providing the facility to carry out the experiment.