Background and Aims: Total Intravenous Anaesthesia (TIVA) is a method used for delivering anaesthesia since 1932. In TIVA, during Target-Controlled Infusion (TCI), the Effect-site concentration of drugs is derived from studies done in western volunteers. The targeted concentration of the drug developed on the pharmacokinetics of the western study population may not match with the Indian population. Our study was an attempt to analyse the targeted concentration of propofol in our patients who underwent Entropy targeted TCI propofol anaesthesia using a Schnider model in ablative surgeries for breast cancer.

Material and Methods: A Retrospective Observational study was conducted in a tertiary cancer centre after the protocol was approved by the Institutional Review Board. All patients who underwent surgeries for carcinoma breast during the period from March 2019 to August 2019 were included in the study.

Results and Conclusions: Thirty-one patients were included. The mean Effectsite concentration of propofol for maintaining the target Entropy of 40- 60 was 3.51 ± 0.58 microgram/ml (95% CI=3.30-3.73). Non-Depolarising Muscle relaxant was given during the maintenance phase after induction in patients who moved during skin incision (77.4%) to achieve an optimal plane of anaesthesia. During TCI Propofol for the optimal plane for surgical procedures, opioid or Non-Depolarising Muscle Relaxant may be used in the maintenance phase and depth of anaesthesia to be monitored as well by pEEG. Further study with a larger sample size using TCI with propofol and opioids is needed to find the Effect-site concentration during maintenance using Schnider model pharmacokinetics.

Total Intravenous Anaesthesia (TIVA) has become a method of delivering anaesthesia for quite a long time since 1932 [1]. TIVA in common practice is being done with liberal use of NDMR, not guided by the monitored Depth of Anaesthesia and without addressing the pharmacokinetic principles of the drug [2]. As a result, when the drug is administered manually as intermittent boluses or as a fixed-rate infusion, the chance of achieving the optimal serum level of the drug and maintaining it till the end of the surgery is less. While overshooting the optimal level can lead to undesirably deep anaesthesia, delayed awakening and hemodynamic instability, undershooting results in the awareness and sympathetic hyper response [3].

As reported by 5th National Audit Project (NAP5), manual infusions are prone to errors in calculations and execution of change in infusion rates [2]. To address this problem, the concept of Target Controlled Infusion was suggested by Kruger Thiemer [4].

A target-controlled infusion works to achieve user-defined drug concentration in a body compartment or tissue of interest. It was first clinically implemented by Schwilden and colleagues [5]. This led to the development of different pharmacokinetic models for the administration of specific drugs used in TIVA and the first TCI (Target Controlled Infusion) system-Diprufusor, was launched in 1996 [6]. The most common adult models used in current practice for propofol are the Schnider model [7, 8] and Marsh model [9].

Plasma drug concentrations in individuals are not identical to that predicted by pharmacokinetic models in TCI pumps. The mean difference between the estimated and the measured concentration is less than 25% [3]. If the patient is from a different population other than the studied one, the difference can be even further ahead [3]. There is also variation in brain concentration of propofol required for anaesthesia between individuals [10]. The pharmacokinetic models used in TCI pumps may not befit Indian patients as the data are based on Western volunteers [11]. Our study was an attempt to analyse the targeted concentration of propofol in our patients who underwent Entropy targeted TCI propofol anaesthesia using a Schnider model in Breast cancer surgeries.

A Retrospective Observational study was conducted in a tertiary cancer centre. This study was reviewed by the Scientific Review Committee (SRC) of the Institutional Review Board (IRB) and the study proposal was approved with no ethical issues (IRB no:1616/IRB-SRC/13/MCC/21-09-2019/4). All patients who underwent surgical resection for carcinoma breast during the period from March 2019 to August 2019 were included in the study. The Patients with inadequate data, those with deviation from the standard protocol of anaesthesia management, and those on antipsychotics and antidepressants were excluded from the study (Figure 1). As our study was Descriptive Observational, the hypothesis was not included. The primary outcome was the mean Effect-site concentration of propofol in patients who underwent Entropy targeted TCI propofol anaesthesia for Ca breast surgeries during the period from March 2019 to August 2019. The Secondary outcome was the adequacy of the plane of anaesthesia during the surgical procedure in patients who underwent Entropy targeted TIVA (TCI propofol anaesthesia) for Breast cancer surgeries during the period from March 2019 to August 2019. 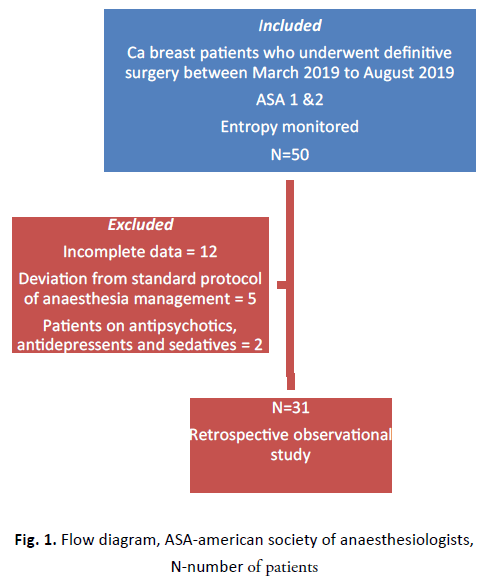 All patients were given anxiolytics (T. Alprazolam) on the night before surgery. No premedication was given on the day of surgery. After ensuring compliance using a checklist, monitors were attached to the patient for non-invasive blood pressure, O2 saturation, End-tidal CO2, and Electrocardiographic monitoring. Induction was done using target-controlled infusion with propofol according to the Schneider pharmacokinetic model. Propofol was given starting at an Effect-site concentration of 6 mcg/ml along with bolus fentanyl 2 mcg/kg. After the loss of eyelash reflex, injection succinylcholine was given at a dose of 2 mg/kg and the airway was secured with I-Gel (size 3 or 4 depending on patient characteristics). During maintenance, propofol Effect-site concentration was titrated in such a way as to attain the State Entropy (SE) between 40-60. When SE was above 60, the Effect site concentration was increased and when SE went below 40, the Effect site concentration was reduced. At the end of the procedure, during the skin closure, propofol infusion was stopped and the patient was extubated and shifted to recovery. As all procedures were superficial, muscle relaxants were not routinely given during the maintenance period. Once the patient opened eyes and responded to the command, I-GEl was removed, and mask ventilation was administered and later shifted to recovery. Heart Rate (HR), Blood Pressure (BP), End-tidal CO2 (eTCO2), Arterial O2 saturation (SPO2), State Entropy, propofol Effect site concentration, and duration of different Effect site concentrations in a patient during the procedure were monitored and recorded.

The Unique Hospital Identification (UHID) numbers of the patients who underwent surgeries for carcinoma of the breast and details of the anaesthesia performed were obtained from the Anaesthesia Register.

The data collection was done from the case file according to the variables mentioned in the Proforma.

The data was collected and recorded in the designed Performa and was assessed for normal distribution. The software used for analysis was IBM SPSS (Statistical Package for the Social Sciences) for Windows, version 20.0. (Armonk, NY, USA: IBM Corp.). All continuous data were expressed in frequency, Mean (SD), Weighted Mean (SD), and 95% confidence interval. 95% confidence interval was calculated for Effect site concentration.

Breast surgeries performed were mastectomies, breast conservation surgeries, and sentinel lymph node biopsy. The mean duration of surgery was 92.74 ± 26.14. Three patients were diabetic, two patients were hypertensive and others had two or more comorbidities (Table 2).

Tab. 2. Showing the Type of surgery done, ASA (American Society of Anaesthesiologists) grading, Comorbidities, Duration of surgery and No of patients whom muscle relaxants were given

Non-Depolarising Muscle relaxant was given after induction in patients who moved during skin incision (77.4%) to achieve an optimal plane of anaesthesia. The mean Effect-site concentration of propofol for maintaining the target Entropy of 40-60 was 3.51 ± 0.58 microgram/ml with a 95% confidence interval (3.30-3.73) (Figure 2). 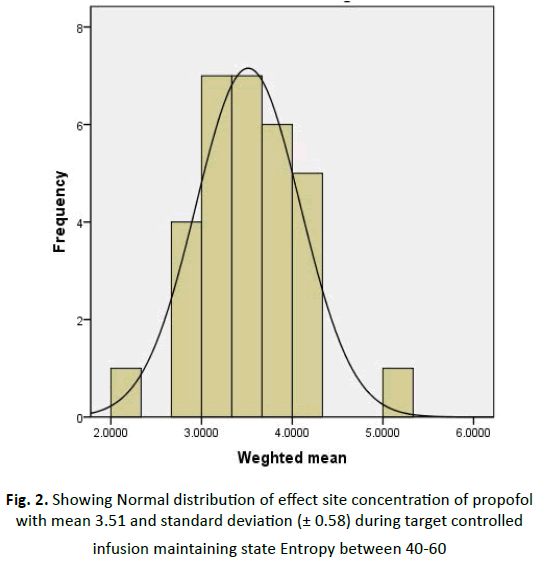 In our study, the mean Effect site concentration of propofol for maintenance, during TCI for achieving the Entropy target of 40 to 60 was 3.51 ± 0.58 mcg/ml. The recommended Effect site concentration of propofol for maintenance without opioid infusion in the TIVA/TCI guideline is 3 mcg/ml-6 mcg/ml [3]. We gave injection fentanyl 2 mcg/kg during induction and no opioids were given during the maintenance period. Nondepolarizing muscle relaxants were not used during maintenance in all cases, considering the superficial nature of these surgeries. Even though Entropy was maintained between 40% and 60%, 77% of patients moved on surgical stimulus and had to be given Non-Depolarizing Muscle Relaxant (NDMR). This movement was not due to intraoperative awareness as we were ensuring Entropy between 40 and 60 [12]. Intraoperative awareness is not always associated with movement even in patients who were not given neuromuscular blocking drugs [13]. Immobility during anaesthesia is primarily related to anaesthetic effects in the spinal cord and hypnosis is associated with the brain [14,15]. In a study done by Sebel and colleagues, the relationship between Bispectral Index (BIS) index value and movement in response to skin incision was investigated. In the centre which used only isoflurane, there was a 50% probability of movement corresponding to BIS of 40. In all other centres where varying amounts of opioids were used, the probability of movement at BIS of 40 was reduced [16].

Valjus and colleagues compared the effect of remifentanil or esmolol during a propofol and nitrous oxide anaesthesia in which SE (State Entropy) was held constant at 50. All patients in the esmolol group moved in response to surgical stimulation while none of the patients moved in the remifentanil group [17]. In an anaesthetic regimen with opioids, patients are less responsive to a surgical stimulus at any monitored index value when compared to no or fewer amounts of opioids [17].

When PEEG (Processed EEG) is monitored, Entropy is maintained between 40 and 60 and if the patient moves during surgical incision suggests that the dose of opioid or muscle relaxant is not adequate for the surgical plane of anaesthesia. Thus by monitoring EEG, we are safe from using higher doses of propofol and its complications. It also helps in avoiding intraoperative awareness, as ensuring Entropy to the recommended level, an adequate depth of anaesthesia is maintained [18]. Use of pEEG in cases where NDMR is not used will prevent the reaching the higher Effect-site concentration of propofol and achieving the adequate depth. In such situations, the clinical signs may be managed by other measures like opioid administration or by NDMR.

A study was conducted by Struys, et al. to assess the performance accuracy of the AAI (A-Line ARX Index) to reflect the hypnotic component of anaesthesia and to measure the loss of responses to different stimulation defined as loss of response to verbal command (LOR verbal), eyelash reflex (LOR lash) and noxious stimulus (LOR noxious) during stepwise increased levels of propofol infusion with and without remifentanil [19]. The performance of AAI was compared with that of BIS and CePROP (Predicted Propofol Effect-site concentration). Fortyfive patients undergoing ambulatory surgery in Belgium were randomly allocated into three groups. The groups were propofol infusion alone, propofol with remifentanil (2 ng/ml) Effect-site concentration (Ce) and propofol with remifentanil (4 ng/ml) Ce infusion [19].

Puri, et al. did a study in adult Indians undergoing elective surgeries with only propofol infusion and found that an effective concentration (EC50) and EC95 of plasma propofol as 2.3 μg/ml and 2.8 μg/ml respectively for loss of response to verbal command. EC50 and EC95 for loss of painful stimuli were found to be 4mcg/ml and 5 mcg/ml respectively [21].

During TIVA with TCI Propofol for the optimal plane for surgical procedures, opioid or Non-Depolarizing Muscle Relaxant may be used in the maintenance phase and depth of anaesthesia to be monitored as well by pEEG. Further study with larger sample size, using TCI with propofol and opioids is needed to find the mean effect size concentration of propofol during maintenance in Indian patients using Schnider model pharmacokinetics.